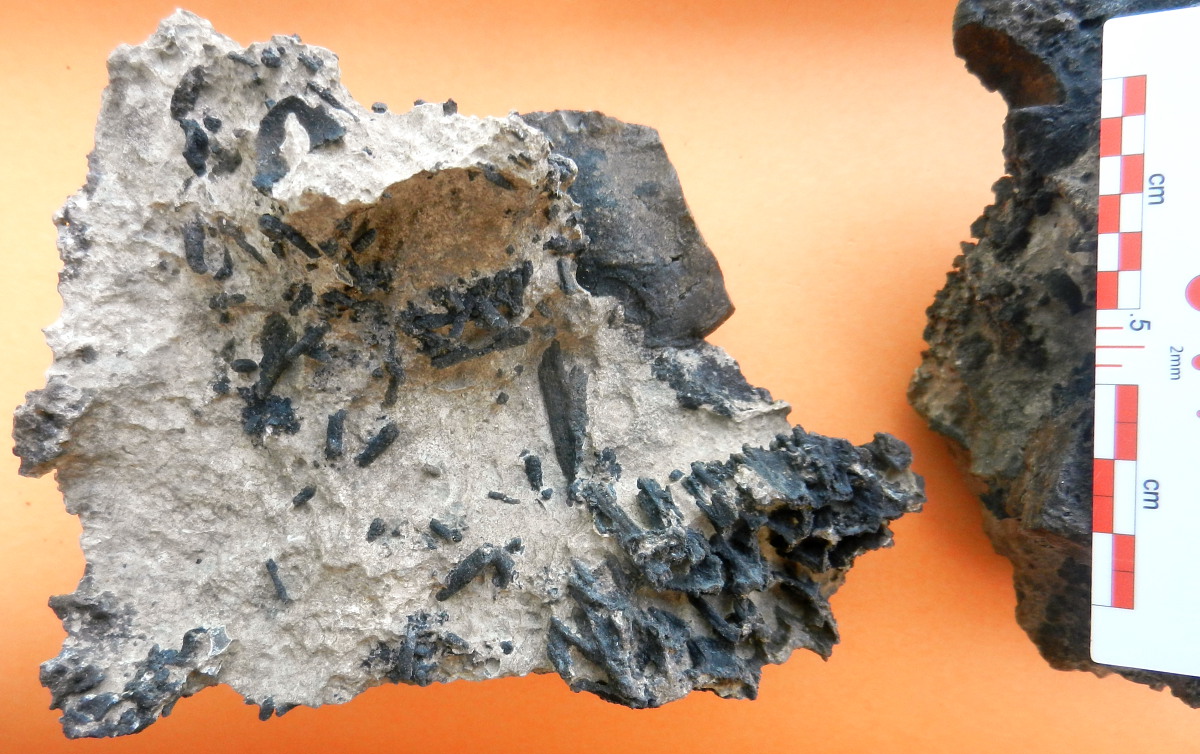 Figs. 1-2: Two similar samples of limestone with a "seam" (a layer, or a tabular nodule) of black chert, and black fossils, namely a small mound of colonial coral (at lower right corner of second sample), and discrete elongate, cylindrical bryozoans. Chert is microcrystalline silica, developed in a variety of sedimentary environments, such as limestones and banded iron formations. Chert is largely derived from biogenic silica deposited in the host rocks A drop in pH (increasing acidity) in pore fluids, attending the decomposition of organic matter, leads to carbonate dissolution and silica precipitation. Chert (variants are flint and jasper) is very hard, breaks with a conchoidal fracture, and so can be worked ("knapped") by a skilled artisan into blades, projectile pointers, scrapers and other tools.
Samples are 15x8x8 cm, 1104.0 grams, and 12x9x6 cm, 983.3 grams.

The middle Ordovician strata of southern and southeast Ontario have been featured in these pages before, and some links will be found below. The fossils, stratigraphy and Paleozoic paleoecology of the region are dealt with in detail in the marvellous, highly illustrated, self-published work of Bill Hessin (2009). The illustrations on this page are of outcrop and loose samples (3 examples each) from limestone exposures along the Crowe River downstream of Marmora. The locality lies on private land, in and adjacent to the river, just above the unconformity that separates the Paleozoic sequence here from the underlying Precambrian shield of the Grenville province.

The pale host rock is a fine-grained limestone, which generates intense effervescence in dilute acid (10% HCl). Fossils appear to be replacements of original structures (mostly carbonates) by fine, dark "cherty" silica (much harder, no acid reaction). The hand specimens are (as expected) non-magnetic (magnetic susceptibility <0.001x10-3 SI units). The fossils appear (to my untutored eye) similar the coral Lichenaria, the branching bryozoan Stictopora (Rhinidictya), and the cephalopod Actinoceras. The stratigraphic unit may be the lower Bobcaygeon Formation, and/or the topmost part of the underlying Gull River Formation, consistent with the fossil assemblage and the presence of abundant black chert. The organisms grew upon or (cephalopods) died and fell down onto a carbonate hardground, a moderately stable substrate on which the benthonic (bottom-dwelling) organisms could flourish (see Hessin, 2009, pp.69, 103 and 151, and introduction on pp.12-36). These strata form part of the larger succession sometimes termed the Simcoe Group (older term: Black River Group), of middle Ordovician age.

Clues to the paleoecology of a sedimentary sequence come from recognition of epiboles, thin stratigraphic intervals that are characterized by anomalous abundance of species that are normally rare or absent, and by distribution of trace fossils, such as burrows, borings or footprints (Brett, 1995, 1998). The fate of carbonate mudbanks now represented by local limestones may be inferred by the distribution of fossil forms. These include the occurrence of benthic sessile organisms such as stromatoporoids (marine, aspiculate calcified sponges), which may be fragmented or variably dissolved by events subsequent to their burial by the host sediments (Kershaw and Brunton, 1999).

Fox (2013) has surveyed chert occurrences from the Lake Simcoe area east through the Kawarthas to Marmora, the Crowe valley and the Kingston region. He has found that the chert occurs as scattered nodules in the host rock, rather than discrete beds. Thus it is not surprising that no clear evidence of indigenous chert mining can be identified in the Crowe valley. He further notes that "as for knapping quality, the vast majority of Trent chert nodules are too thin and jointed for biface production (most of this chert – collected as pebbles/cobbles - is worked through bipolar percussion and subsequent edge retouch)" (Fox, pers.commun., 2020). 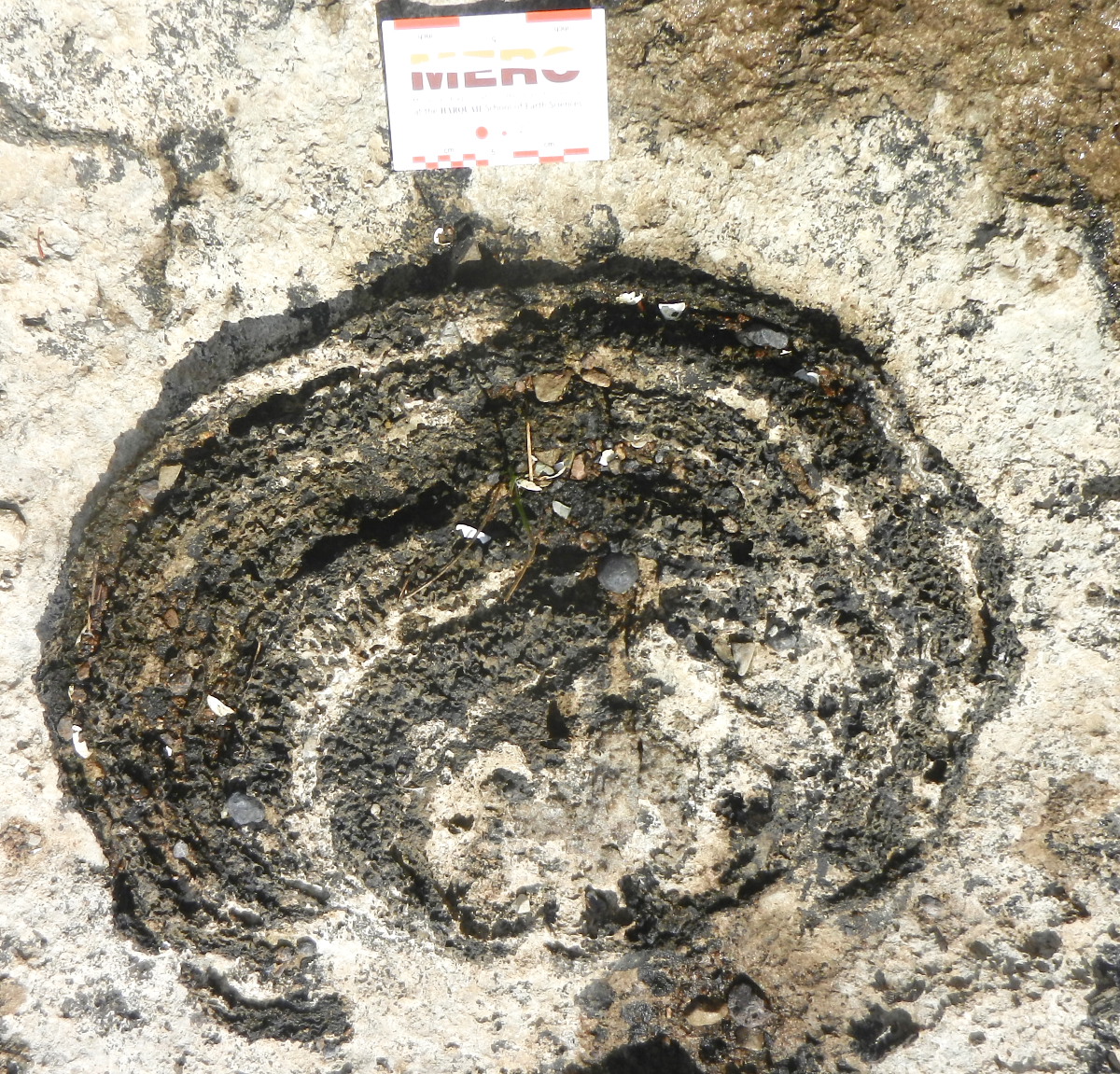 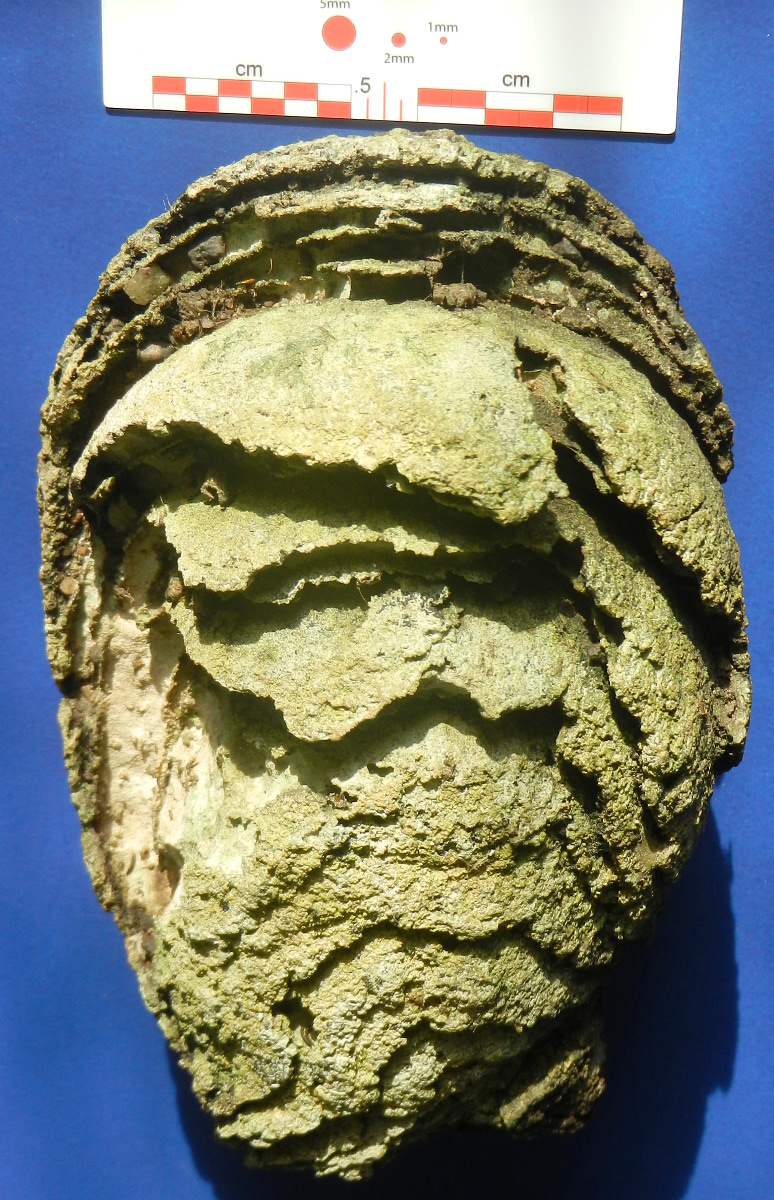 Figs. 3-4 : Stromatoporoids are an order of strange fossils of the class Hydrozoa, with carbonate skeletons. Related forms including the living Hydra, the long-extinct graptolites, and - more distantly - the corals and sea anemones. Stromatoporoids are found mainly from the Ordovician to the Carboniferous, being most abundant in the Devonian (Wood, 1946, pp.76-78). They are typical of reef environments, and may be sufficiently abundant to be of rock-forming proportions. The skeleton consists of concentric laminae separated by interstices, which may be cross-cut by radial pillars. They are perhaps enigmatic in terms of their relationships to other classes of fossil, but are frequently desribed in the palaeontological literature, including reports on southern Ontario dating to the 1920s or before. The typical two-dimensional shape of these fossils is seen in Fig. 3, while the unusual piece beside it is a loose, evidently weathered-out specimen. The examples in the local limestone range from about 5 to 30 cm or more.
Sample at right is 14x9x8 cm, 1416.9 grams.


The Ordovician strata exposed, from the base up, and from north to south, from Stony Lake to Presqu'ile at Lake Ontario are divided into five formations, as follows (note that nomenclature changes through the decades - relatively recent work is that of Carson, 1979, 1980,1981, plus the compilation of Hessin, 2009 - the following is condensed from Carson, 1979, 1981):

The Paleozoic strata of southern Ontario are overwhelmingly of sedimentary origins. Other than a thin basal layer of sandstone (exposed, e.g., around Elgin, northeast of Kingston) and minor shales (Shadow Lake Formation), almost all Cambrian-Ordovician strata exposed east of Toronto are carbonate sediments. However, relevant to our story, there is a layer of weathered volcanic ash, no more than 20 cm thick, exposed within bedded limestone host rock, just to the west of Marmora. Today these rocks are composed of clay minerals, derived from the weathering of original silicate minerals and perhaps glass, plus accessory resistant quartz and zircon, and further traces of pyrite, calcite and feldspar. The ash beds lie within the Bobcaygeon Formation, and - though detailed work is yet to be completed - it is reasonable to suppose that the short-lived and presumably distant volcanic eruptions that generated the ash would have affected the seawater composition of the time, maybe promoting the deposition of colloidal (gel-like) silica, which may have crystallized, via an early opal-like state into the microscopically crystalline chert nodules, that we see today across a wide area. 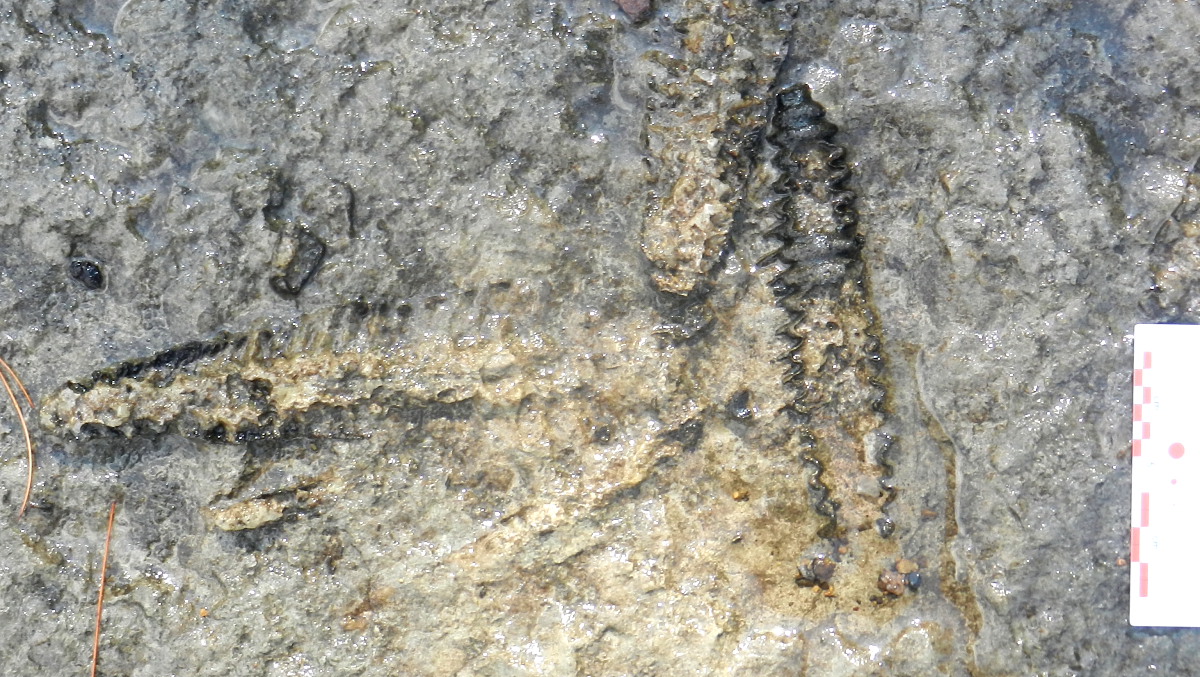 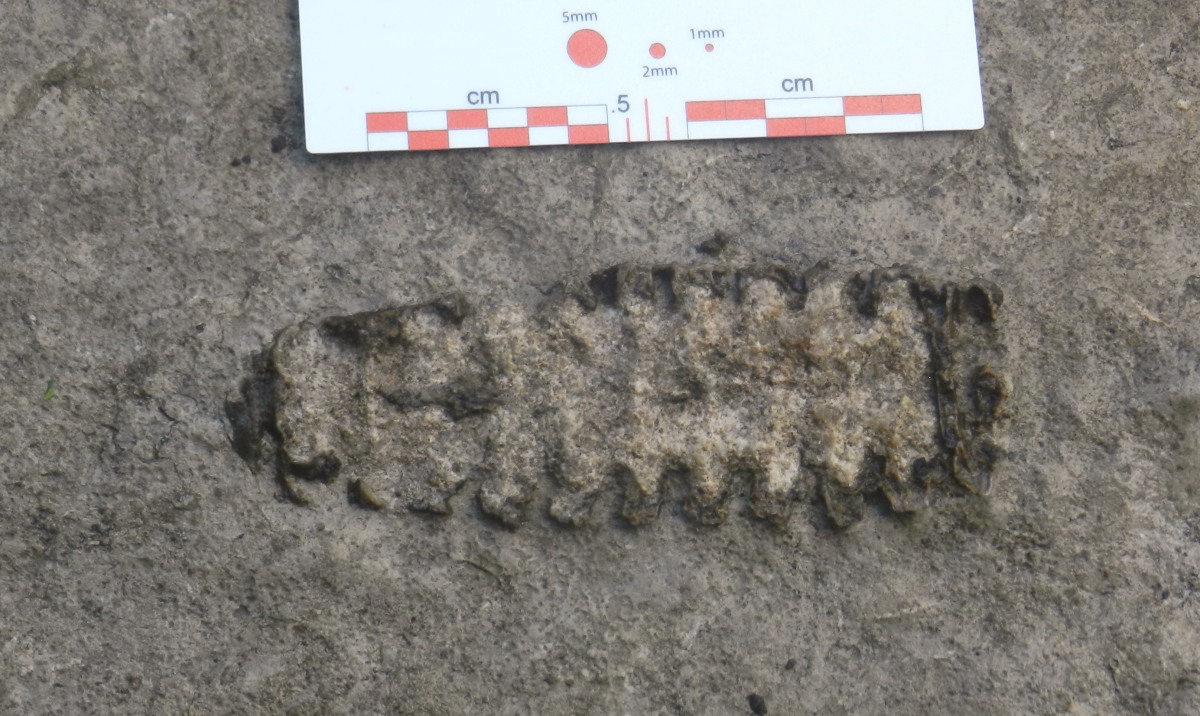 Figs. 5-6: Here are two examples of straight-shelled orthoceratid cephalopod fossils. Surviving successors of these striking forms (which have many genera around the world, that may approach 2 metres in length) include octopus, squid and cuttlefish.

A few words are in order concerning the chert, which is quite localized in its occurrence. This is largely from the archaeological perspective, seeing chert as a hard, potentially valuable raw material from which to manufacture stone tools and weapons. The Rock of the Month Index (below) has various entries on chert in this context, in particular from "nearby" Pennsylvania.

Luedke (1992) provides a good review of chert as a worldwide resource across time (the "Stone Age", however defined - Paleolithic, Mesolithic and Neolithic - covering different periods in different parts of the globe). She takes a broad definition of what "chert" is, including all manner of components of sedimentary rocks dominated by microcrystalline quartz, including flint, chalcedony, agate, jasper, hornstone and novaculite. Her review covers the genesis of chert, and offers select examples, including the flint in the Cretaceous Chalk of England; Silurian and Devonian cherts from Michigan (the subject of her PhD thesis); and Devonian cherts from Ontario, Ohio and New York. Eley and von Bitter (1989) made a survey of chert in outcrops of Ordovician, Silurian and Devonian age in southern Ontario, as a helpful reference to provenance studies in archaeology. Chert may replace the host rock, and many kinds of organic remains, both microfossils and larger fossils. In a later review, covering all Ontario, Fox (2009) illustrates a number of chert types, by locality, which are variably good raw materials for lithic artefacts.

Distinguishing different chert types is key to discerning ancient trade routes and the dispersion of people and products across millennia. In some cases chert texture, colour and other features, best studied in large samples of arrowheads and other items, may suffice. Petrography, generally using translucent, glass-backed thin sections, is a long-established (mid-19th century) and powerful tool. Geochemistry offers another approach to provenance: Julig et al. (1992) examined the chemistry of small (0.2-0.6 grams) chert samples from the Midwest, the upper Great Lakes and northern Ontario (from the Thunder Bay area to the Hudson Bay Lowlands).

Let's take a quick look at three examples of the vast and detailed literature on chert in the archaeological context. Parkins (1977) studied chert of the middle Devonian Onondaga Formation of southwestern Ontario and western New York. This geological unit is a coral reef complex with four members, which vary widely in their chert content and chert characteristics. Chert is hard but brittle, and thus rapidly destroyed by glacial transport (ibid., p.25). Jarvis (1988) examined Onondaga samples, using the same method of analysis as Julig et al., namely instrumental neutron activation analysis at the prolific but now-decommissioned SLOWPOKE reactor facility at the University of Toronto). Samples came from a study area in and immediately east of the city of Buffalo. Janusas (1984) published the results of his MA thesis, completed the previous year at the Department of Anthropology, Trent University, on the Devonian-age Kettle Point chert. The chert may be darkened by organic matter, and contain fossil and microfossil remains such as conodonts, radiolaria, sponge spicules, scolecodonts and foraminifera.

We close with a useful caveat. Janusas (ibid., p.28) notes that the late Frank W. Beales and W.A. (Bill) Fox found that chert may vary significantly within a single outcrop. Thus collecting the most-representative rock samples, whether in outcrop or as glacial or beach cobbles, is key to reliable outcomes, when potential sources are to be compared with projectile points and other chert artefacts.

Acknowledgements: Thanks to Tim Trustham of Quinte Conservation for a knowledgeably-led and very enjoyable (except for the sharp rocks!) exploration of the river and its banks, at summer low-water, August 2020. Prof. W.A. (Bill) Fox of Trent University provided valuable caveats concerning the Paleozoic strata and the chert within, and drew attention to the report by Andy Fyon (2017). Thanks also for the food for thought from Frank Brunton (OGS) and Marc Forget.

Hessin,WA (2009) South-Central Ontario Fossils: a guide to the ancient marine life of the region. Self-published by W.A. Hessin, Cobourg, Ontario, 286pp. plus CD-ROM.

Chert from the lower Crowe valley

Bryozoan from the Campbellford area

Crinoidal limestone from the Campbellford area

or, visit the chronological Turnstone "Rock of the Month" Archives!