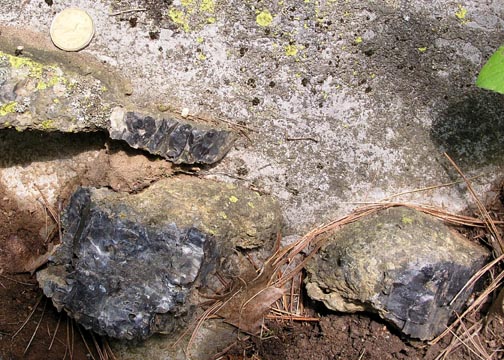 This large limestone block displays lines of cm-scale ovoid nodules of grey to black splintery chert, replacing the host rock along bedding planes. The presence of the chert indicates that the host limestone is near the contact of the Gull River Formation with the overlying Bobcaygeon Formation. These strata are part of the Simcoe Group of middle Ordovician age. These carbonate sediments are outcropping near the northern margin of an erstwhile warm sea, whose deposits cover a wide region of southern Ontario and the adjacent U.S.A., a structure often referred to as the Michigan basin. The only complete section through the Gull River Formation is at the flooded open pit of the former Marmoraton iron mine, 13 km to the northeast, where the Gull River strata are 33 m thick (Carson, 1980). The Bobcaygeon Formation predominates in outcrops southward to Campbellford where, just south of the town by Ferris provincial park, it is in turn overlain by the succeeding (younger) limestone and shale of the Verulam Formation.

The chert is often brecciated on a mm-scale. The $1 coin is 26 mm in diameter.

The chert is infrequently exposed in the Crowe River valley in northeast Seymour township, Trent Hills area, northeast Northumberland county, southeast Ontario, in and adjacent to the Crowe Bridge Conservation Area. This site is located on the left (south) bank of the Crowe 2 km upstream of the confluence with the larger Trent River, and 10 km upstream of downtown Campbellford. The Crowe, tributary of the Trent, is not in the main Trent-Severn waterway: a low weir downstream of the Crowe Bridge precludes navigation from the larger river. The area of and around the conservation area is also notable as an inlier, an area where older rocks are visible as a "window" through younger strata. The Gull River strata can be considered an inlier within the Bobcaygeon rocks, but far older rocks of the Precambrian Grenville shield are also exposed hereabouts, upstream at Allan Mills, and beneath the Ordovician limestone cover in the deep open pit of the Marmoraton mine (Carson, 1980).

Chert is also reported to the north (Belmont & Methuen townships) and to the northeast (Marmora and Lake townships). Aspects of the local bedrock geology have been documented by Winder (1954) and Carson (1979, 1980). Formerly classified as the Black River strata, the host Ordovician limestone beds of the Simcoe Group have been described in the workings of the old Blairton and Marmoraton iron mines, and along Highway 7 in the Marmora area (Winder, 1954). The Paleozoic strata are generally flat-lying, except where draped over irregularities in the Precambrian basement, and when disturbed by geologically-young "pop-up" structures (Winder, 1954; Carson, 1979; Karrow and White, 2002). The middle Ordovician strata are divided into five formations in the region. The Gull River Formation is mainly lithographic limestone, often with stylolites. Fossil cephalopods and stromatolites are common on bedding surfaces. The Gull River Formation forms scarps near the shores of Round Lake, Crowe Lake and Belmont Lake: the coral Tetradium cellulosum occurs near the top, and the black chert nodules are found here and at the base of the overlying Bobcaygeon Formation, which is also fossiliferous. The Bobcaygeon limestone, found northwards from Campbellford, is unevenly bedded and often flaggy. Fossils are common here, especially brachiopods, and fist-sized nodules of black chert are abundant near the base (Carson, 1979).

Sporadic sampling of the limestones of the Gull River, Bobcaygeon and Verulam Formations near Campbellford indicates that brachiopods and bryozoans are the most widespread bioclasts, with lesser crinoid and rare trilobite fragments. Algal oncoliths are locally abundant. Accessory minerals include quartz and chalcedony, pyrite and goethite, and the brown phosphatic collophane - silica and pyrite are found in the lower formations, collophane in the Verulam Formation, and traces of Fe oxyhydroxides are present throughout. The fossil fragments constitute 15-50 volume percent of the samples (Wilson, unpublished data).

Chert has been studied in some detail across Ontario, especially along the north shore of Lake Erie, since this silica-dominated rock was a favourite of First Nations artisans who manufactured weapons and tools from the hard material which could carry a sharp edge. Ontario chert localities described by Eley and von Bitter (1989) include Nanticoke, Port Dover, Dunnville, Port Colborne, and Selkirk, as well as Clear Lake, Marmora and Oak Lake.