Based on 165 observations in Seymour township, Northumberland county, southeast Ontario, 1998-2013.

The ring-billed gull is one of the most abundant species of birds along the shore of Lake Ontario, as can be seen at the Leslie Street Spit (an artificial peninsula and associated series of ponds and bays that protrudes into the lake from the east side of the downtown Toronto lakeshore). It is also an abundant summer nesting bird at Presqu'ile park (see below). In our area, the gull appears in March and departs in September and October, with extreme dates noted as 8 March and 26 October. The numbers are under-reported, no doubt, since gulls in the distance are often not identified definitely at species level, yet the ring-bill is by far the most likely gull to be seen here. Local haunts include the gorge of the Trent river above and below Ranney Falls, where tens of gulls are often seen in later summer when the water levels are low, affording access to shallow pools and the food that they offer. Other sites are nearby Ferris park, the township landfill on 5th Line West, and the Crowe Bridge Conservation Area. After the gulls depart, they may still be found to the south, at Goodrich-Loomis Conservation Area and especially at Presqu'ile and Sandbanks parks. A typical regional winter sighting would be on the shore at Cobourg, 60 km to the southwest, on 29 December 2003. 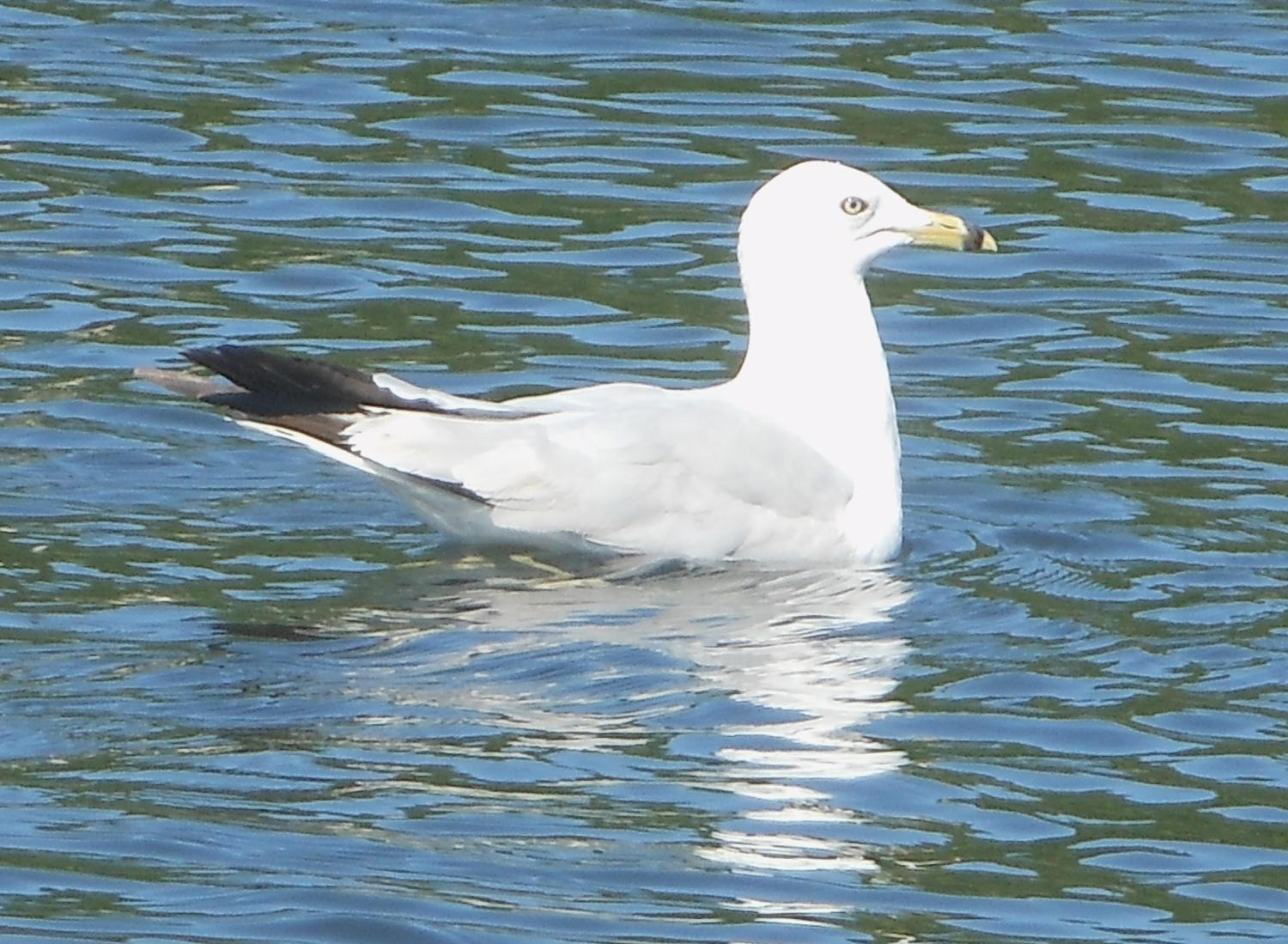 This ring-billed gull was seen floating placidly in the Trent canal above locks 11-12 at Campbellford, foraging for tidbits in the water, on 12 July 2014.

At Presqu'ile provincial park, roughly 40 km to the south, this gull is an abundant migrant and summer resident, and the most common bird species at the park, spring to fall (LaForest, 1993, pp.172-176). The birds nest in the tens of thousands, after returning from late January onwards, generally departing for the southern Atlantic coast of the southeast USA by early October. A few birds may overwinter, given that there is always open water, an essential which is largely absent from our area for several months.

In Peterborough county, to the northwest, the situation is markedly different from coastal Presqu'ile, in that the ring-billed gull appears in early March, is largely absent in early summer (i.e., it does not breed in large numbers), and then returns midsummer and departs again by early December (Sadler, 1983, p.86).

The ring-billed gull increased its numbers in the latter half of the 20th century, particularly at favoured sites along the shores of the lower Great Lakes (Cadman et al., 1987, pp.180-181). In the revised Bird Breeding Atlas this gregarious bird had increased to an estimated Lake Ontario population of 155,000 pairs (Cadman et al., 2007, pp.260-261), with an estimated 59,000 pairs at the Leslie Street Spit and 58,000 pairs at Presqu'ile.