a copper selenide from eastern Europe 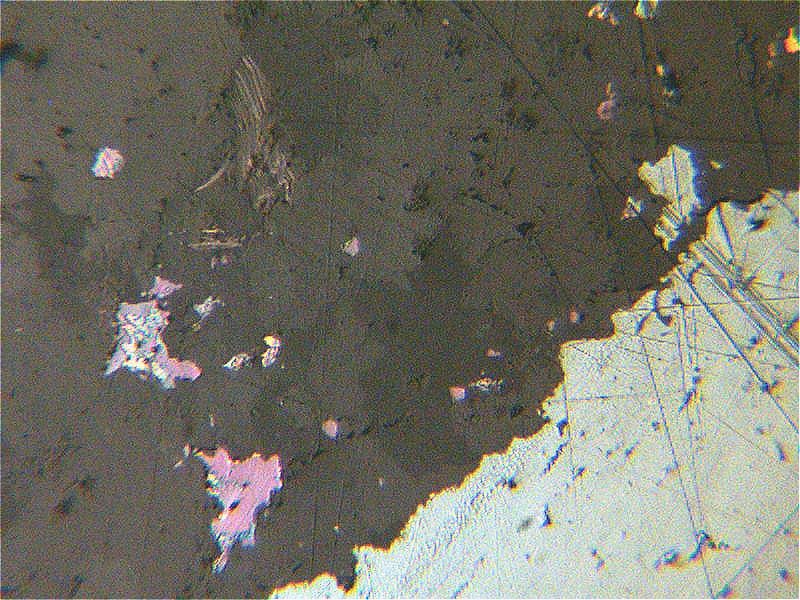 An unusual S-deficient selenide assemblage in carbonate-rich gangue, cut by late carbonate veining with traces of late selenide and graphite. Sample 1570 from David New. This example of Se minerals is from western Moravia, in the former Czechoslovakia, eastern Europe (the region is now in the southeast corner of the Czech Republic). The sample displays ore minerals in a quartz-carbonate gangue. The mineral assemblage in this rich Cu selenide ore is tentatively identified as berzelianite and eskebornite with minor (but very distinctive) umangite.

This rich Cu selenide ore contains bluish (?) berzelianite with patches of yellow (?) eskebornite and scattered granules of magnetite. These minerals form a selvage to a quartz-carbonate vein containing lilac umangite. The gangue appears to be a mixture of quartz and cleaved carbonate. The vein is dominated by (?) dolomite. Irregular ore-mineral grains are disseminated throughout the ore, and form masses on vein margins. There is a pale bluish isotropic ore mineral, thought to be berzelianite, cubic Cu2-xSe, plus lesser eskebornite, CuFeSe2, and umangite. The umangite, tetragonal Cu3Se2, forms irregular grains to 220x150 microns. It displays remarkable colours: violet-red to blue-grey bireflectance and brilliant red to dull orange anisotropy. It is generally isolated within the gangue, not touching the other ore minerals, and only rarely enclosed by berzelianite. It forms perhaps 2% of the small sample, which also contains magnetite, pyrite, graphite (thin flakes in margins of carbonate vein), and rare chalcopyrite.

The copper selenide umangite is relatively uncommon (16 records in the MINLIB database, 1916-2008). As seen in photomicrographs, it is one of the most strongly coloured of ore minerals.

Umangite (Palache et al., 1944, pp.194-195) is named for the Sierra de Umango, La Rioja province, Argentina. The mineral is reported from localities in Argentina; western and southern Australia; Bolivia (the El Dragon deposit, Grundmann et al., 1990); Germany (Andreasberg, in the Harz Mountains); the U.K. (Hope's Nose near Torquay in Devon, England); and the USA (the Republic mining camp in northern Washington state, Staatz and Pearson, 1990). Umangite has also been reported from Canada, in the uranium fields of northern Saskatchewan. An example is the Eagle Group and its massive selenides (Robinson, 1955, pp.25-26) including massive umangite plus minor klockmannite, clausthalite and berzelianite.

A second example of umangite, from the Beaverlodge district of northern Saskatchewan, Canada, is shown in the following photomicrograph. 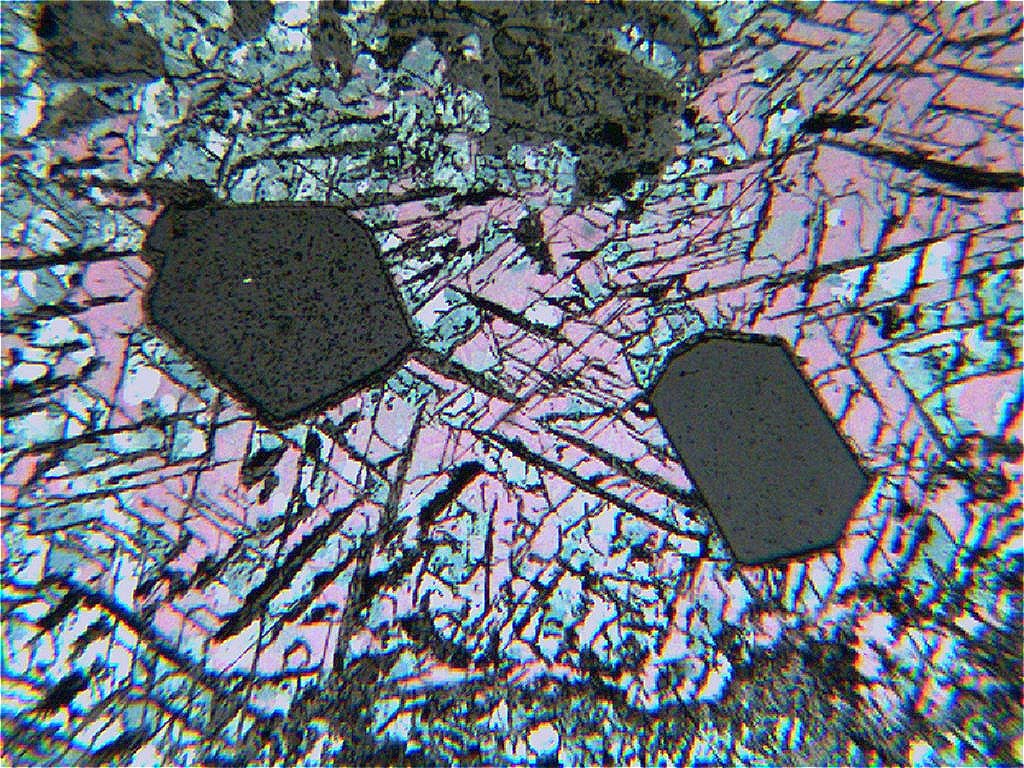 This is semi-massive granular umangite from the Ato Bay (Nesbitt Bay) locality in the Beaverlodge district. A range of selenides are reported from various localities in Saskatchewan's "uranium country". The photomicrograph was taken in plane-polarized reflected light, nominal magnification 100X, long-axis field of view 0.9 mm. The remarkable colour of the mineral is apparent. Associated phases include quartz, malachite, calcite, (?) chalcomenite, and other selenides.