in copper mineralization from Spain 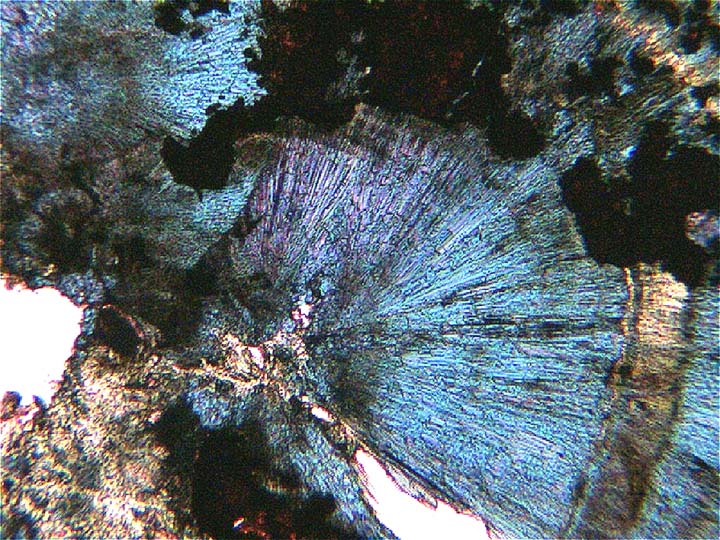 Azurite is a colourful secondary salt formed by the alteration of pre-existing copper-rich minerals, often sulphides. The mineral most often occurs as thin films on older minerals, often accompanied by other colourful weathering products, such as the related green carbonate malachite, and orangey iron oxide, goethite. In the figured sample, these three minerals occur in an oxidized sulphide-rich carbonate vein. Associated minerals are the primary copper sulphide, chalcopyrite, plus chalcocite and pyrite. Photomicrograph in plane-polarized transmitted light, 100X magnification, long-axis field-of-view 0.9 mm. The sample is from a property in southern Spain, currently being explored by AuEx Ventures and its successor company, Renaissance Gold. The area has been identified as a focus of IOCG (iron oxide- copper- gold) mineralization. Azurite, the associated oxidized minerals and chalcocite are all secondary species, formed from the older chalcopyrite. The azurite is pleochroic in thin section, and displays both radiating and stacked tabular habits.

Azurite, formula Cu3(CO3)2(OH)2 is a monoclinic carbonate, first described by Beudant in 1824. The name is derived from the Persian word for blue. It was previously known as chessylite.