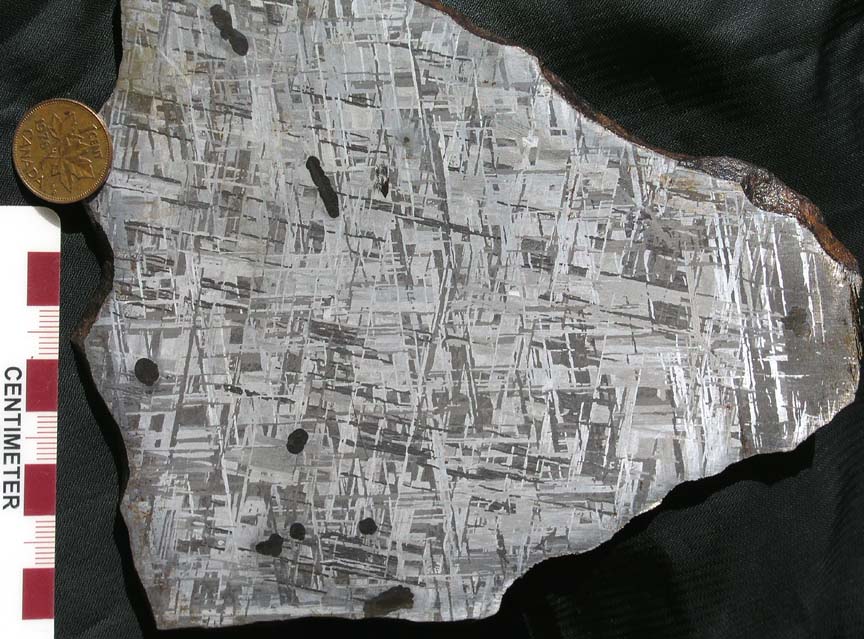 The name Gibeon applies to one of the largest iron meteorite finds on Earth. Curiously, Gibeon was found in the arid country of Namibia, host to the world's heaviest known meteorite, Hoba. The cumulative mass of recovered Gibeon iron is more than 20 tonnes. The wide strewnfield has resulted in numerous synonyms, including Amalia Farm, Bethany, Damaraland, Keetmanshoop, Lion River and Springbok River.

This sample is a sawn slice, 14x13 cm across, 4-5 mm thick, weight 553 grams. It was acquired from Blaine Reed Meteorites, Delta, Colorado, ex-collections of Robert Haag and Blaine Reed, and has been used extensively for teaching purposes. The sawn slice, buffed and subject to a light acid etch on each face, is indeed very instructive,

The great availability of Gibeon iron has encouraged the inclusion of the meteorite in all kinds of systematic studies of iron meteorites. Gibeon is described in some 85 MINLIB records, 1961-2008. Gibeon samples are represented in many museum collections worldwide. Gibeon is described in numerous meteorite catalogues (e.g., Frick and Hammerbeck, 1973; Grady, 2000, p.214). It is classified as a IVA, fine octahedrite, bandwidth 0.3 mm. Representative analytical data include 7.68% Ni, 1.97 ppm Ga, 0.111 ppm Ge and 2.4 ppm Ir.

This sample is a slice through a mass of iron some 14 cm in diameter. It displays: a) the smooth, ablated outer crust of the parent fragment; b) the Widmanstatten pattern characteristic of many iron meteorites; and c) small rounded inclusions, apparently troilite (iron sulphide) swathed in kamacite (a nickel-iron alloy), although other combinations of minerals are possible, including graphite and phosphides. The distinctive Widmanstatten pattern, known for more than 200 years, is due to the intergrowth of two cubic nickel-iron alloys with different structures and nickel contents. These are the relatively Ni-poor kamacite and Ni-rich taenite. In the limited experience of the author, kamacite generally contains some 5.0 to 7.5 wt.% Ni, while taenite and the less-common tetragonal phase tetrataenite more typically contain 25-55 wt.% Ni. These alloys do not occur on Earth, where metals such as nickel and cobalt mostly display chalcophile tendencies, i.e., forming sulphide minerals. For a concise description of the structure of iron meteorites, see Hutchison (2004, pp.324- 331).

In the past half-century Gibeon has been the subject of geochemical and other measurements which by now include a goodly fraction of the periodic table, including both elemental abundances and isotope ratios. Herr et al. (1961) included Gibeon in an early attempt at Re-Os dating of iron meteorites. Subsequent work on Gibeon has included many papers on the platinum group elements, gold and silver; rare gases; and many other metals such as molybdenum, thallium and tungsten. In a recent brief summary of the genesis of iron magmas, Wasson (2008) cites recent work on Gibeon as consistent with genesis of IVA irons by impact-driven partial melting of an L-LL chondritic precursor, leading to loss of volatile Ge and Ga and the reduction of FeO to lower the Ni content of the metal phase.

The iron meteorite has been known for 170 years now, but a most curious fact is that within the 540x330 km meteorite strewnfield is a 190x140 km kimberlite field, with 45 known pipes. The Gibeon kimberlites were referred to by Cornelius (1920, pp.37-38), whose description of hardscrabble desert prospecting for diamonds and metals, and of the harsh colonial history of the region, is still well worth reading today. The area also includes an upstanding dome, an inselberg known as the Gross Brukkaros structure, which appears to be the surface expression of one of dozens of local carbonatitic intrusions of upper Cretaceous age. It has been suggested that this is no coincidence, and that a large impact event, the fall of the Gibeon iron, fractured the crust to permit the alkaline magmatism (Khazanovitch-Wulff, 2001). However, the magmatism is dated at 75 Ma, and thus the implication is that the iron meteorite has survived for that long on the Earth. Whatever the merits of the argument, the spatial overlap of these features is striking.

Sears (2001) commented on the unusual offering, in that year, of a set of laminated plastic cards that could be obtained via purchases of British breakfast cereal, each card containing tiny shards of meteorite. The author has a sample from this unique promotion, containing a dozen small lathe turnings of metal, said to be derived from a 15-kg mass of Gibeon found in 1964. One interesting feature of a March 2003 visit to the Smithsonian Institution was a video on the Gibeon iron, includes cutting and etching, sample preparation to reveal the Widmanstatten pattern. In terms of materials science, iron meteorites can be thought of as a family of natural steels. Experiments on Gibeon compared with pure metallic iron suggest that the meteorite Ni content may retard wustite (oxide, FeO) formation, and Gibeon metal may under given circumstances oxidize more than two orders of magnitude slower than pure iron (Visscher and Lodders, 2002). The relative paucity of inclusions may also help explain the excellent curatorial stability of much Gibeon iron, relative to some other meteoritic irons.

Visscher,CW and Lodders,K (2002) Oxidation of the Gibeon IVA iron meteorite. Meteoritics & Planetary Science 37 no.7, supplement, A144.