from the north coast of Iceland

The whole of Iceland is displayed in series of nine maps at 1:250,000 scale, in both topographic and geological series. The map areas of interest here are sheets 4 and 7, mid-north and northeast Iceland, respectively. The maps viewed for this note were published by the Geodetisk Institute of Copenhagen in 1966. The exact provenance of the specimen is lost to us. It is most probably from the north-facing coast of Sjavarsandur, south of the bay of Skjalfandi, on the west side of the Tjornes peninsula, south of Husavik and northwest of Myvatn (a town, located inland to the south of the peninsula).

The sediments of the Tjornes peninsula have been assigned an upper Pliocene to Pleistocene age (Einarsson et al., 1967). Marine and non-marine sediments, intercalated with basalt flows and, higher up, with tillite layers representing at least 10 glacial episodes, offer a tantalising record of the Ice Age history of the northern hemisphere, more complete than previously noted in North America and Europe. The evidence of as many as 10 glaciations suggests that the Bering Land Bridge, thought critical in the peopling of the Americas, may have been renewed as many as ten times by glacial-eustatic sea level lowerings (Einarsson et al., 1967). Detailed studies of bivalves, echinoids and brachiopods suggest periodic Arctic linkages between the Pacific and Atlantic oceans (Durham and MacNeil, 1967). The molluscs in the Tjornes Beds include bivalve genera such as Glycimeris, found also in the sandy Red Crag deposits of Essex, northwards into east Anglia (the counties of Suffolk and Norfolk), in southeast England. The late Tertiary and Quaternary paleoecology of that region of Britain has been documented in great detail since at least the 19th century, and some of the more-recent work can be found in: Greensmith et al. (1973); Hunt (1989; Head (1998); as well as a non-technical synthesis of Essex geology by Lucy (1999).

The mid-ocean-ridge volcanism, as in Hawaii, has been linked to the upwelling of a deep mantle plume (Schilling et al., 1999). The Tjornes district is seen as a fracture system, part of the larger-scale rifting of Iceland, and the wider Atlantic, bisecting the island in a broadly southwest to northeast direction (Saemundsson, 1974).

The local geology has been well-researched, being such an ever-present, active thread in the fabric of Icelandic life. The wild landscapes of Iceland and Scandinavia influenced Old Norse mythology (Bergstrom, 1989). To this day the scenery captivates and draws tourists from around the world (e.g., Winter, 1997; Hill, 2011; Kunzig et al., 2012).

An Icelandic contribution to geology, beyond the ubiquitous volcanic features and hot springs, is the sandur (plural sandar), alluvial outwash plains deposited by streams of meltwater flowing away from the front of a glacier (Bluck, 1974; Maizels, 1993; Zielinski and Van Loon, 2003). They are known elsewhere in the world, including Poland and (Church, 1972) Baffin Island in the Canadian Arctic.

Postscript: two polished thin sections were prepared from an offcut sliver of the sample, as shown in the following images. 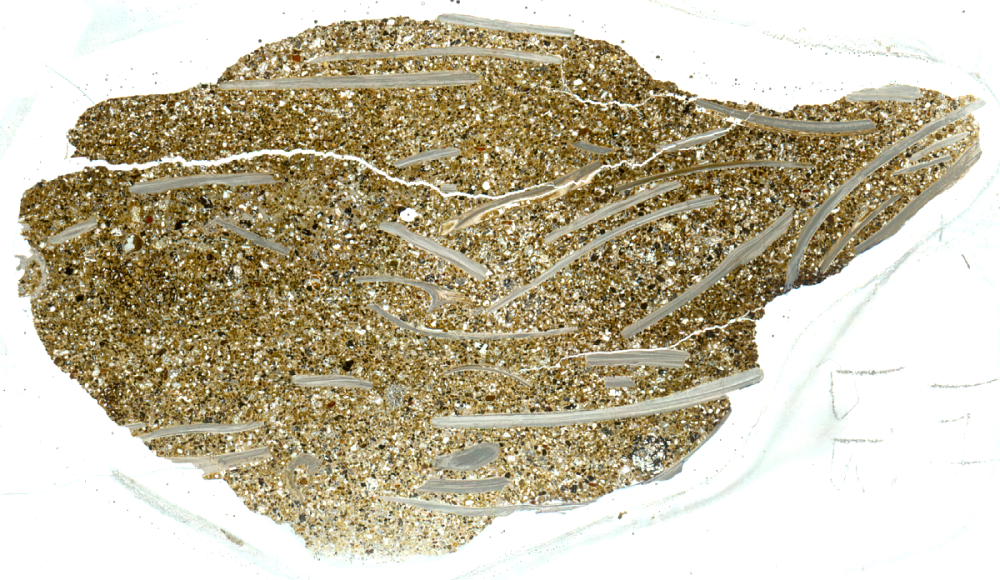 Figure 2, above: a thin section, viewed in transmitted light. The lamellar structure of the mollusc (bivalve) shell fragments is prominent, within the fine granular groundmass. The maximum lateral dimensions of the rock slice (circa 0.03 mm thick) are 40x23 mm. 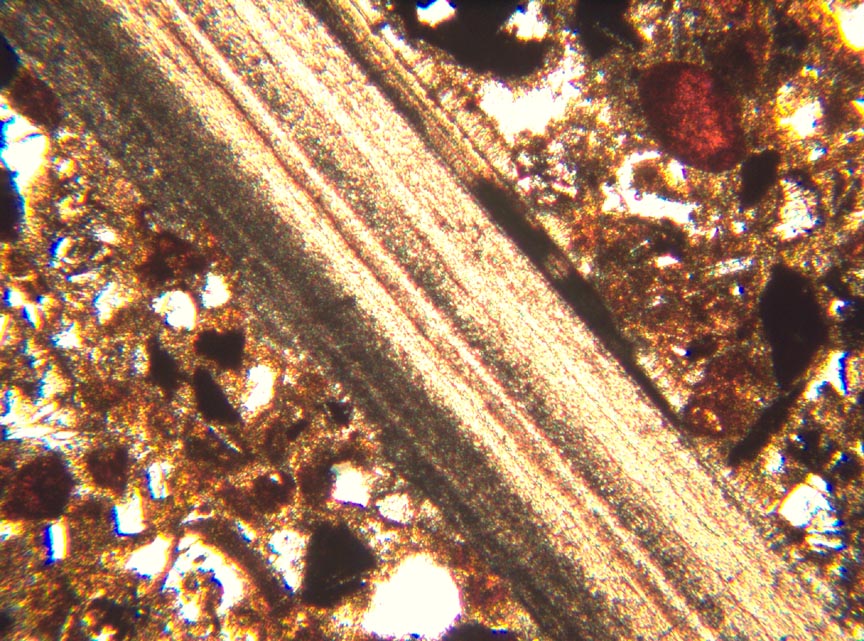 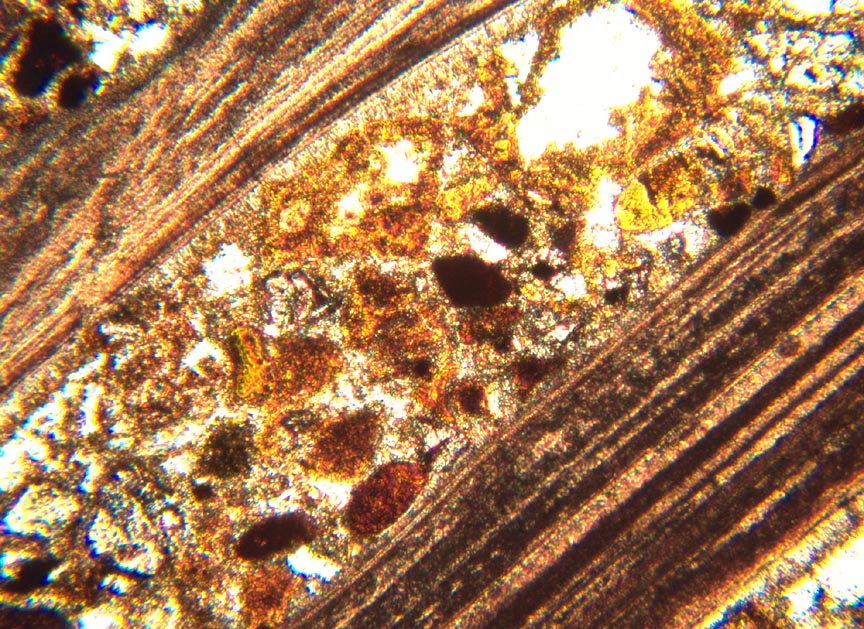 The two photomicrographs display the shell fragments in a fine-grained groundmass of igneous crystals, mostly 0.1 mm or less in diameter. These include olivine, clinopyroxene and plagioclase feldspar in an oxidized matrix. Some of the olivine is altered to dark brown "iddingsite". Most notably, the shells are not the only foreign ingredients: the rock also contains rounded carbonate grains and scattered grains of quartz, which is out of chemical equilibrium with the olivine of the host rock. The nature of the groundmass which cements the crystals and shells is critical to the interpretation. If it is a devitrified glass then the rock is properly a lava. However, if the scattered voids are vesicles (gas bubbles) and the matrix a very fine-grained dust or silt, then the rock may be a tuffaceous deposit. Upon further examination, the sample contains about 80% magmatic components, including what appears to be a partially devitrified basaltic glass (palagonite) and abundant sheet silicate minerals, including serpentine replacing olivine, as well as various magmatic minerals found in basalt, such as pyroxenes, olivine, plagioclase feldspar and Fe-Ti oxides. The remainder of the rock seems to have been scoured from a beach or older beach deposit: quartz (sand grains), shells, and rounded carbonate blobs, perhaps derived from broken shells. The quartz remains more angular than the carbonate, perhaps because it is more refractory, and slower to alter in proximity to lava. So, if the identification of a quenched glass is sound, this is indeed a "fossiliferous basalt", and at the least, a "fossiliferous basaltic tuff".

Acknowledgements: The sample, maps and memories were all proffered by Doug Astill, who explored this fascinating land in the summer of '69! The thin section, of a tricky material, was rendered in expert fashion by Anne Hammond.

Einarsson,T, Hopkins,DM and Doell,RR (1967) The stratigraphy of Tjornes, northern Iceland, and the history of the Bering land bridge. In `The Bering Land Bridge' (Hopkins,DM editor), Stanford University Press, 495pp., 312-325.

Head,MJ (1998) Pollen and dinoflagellates from the Red Crag at Walton-on-the-Naze, Essex: evidence for a mild climatic phase during the early late Pliocene of eastern England. Geol.Mag. 135, 803-817.

Saemundsson,K (1974) Evolution of the axial rifting zone in northern Iceland and the Tjornes fracture zone. Bull.Geol.Soc.Amer. 85, 495-504.