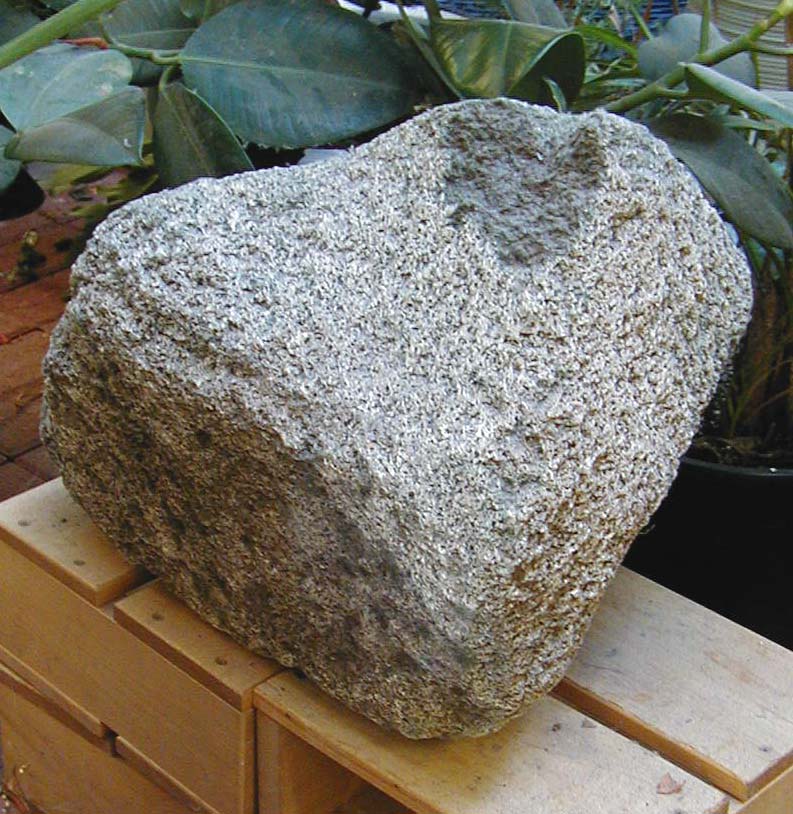 A striking boulder, weighing 74 kg, is on display at a Marmora school, to which it was donated by Mr. Art Priestley in January 2000. It is a rather well-rounded, 53x38x34-cm block with a rough exterior. It is very distinctive, and had been tentatively identified as a meteorite. If verified as such, a rock this big would be the fifth-heaviest Canadian meteorite. Two stony and two iron meteorites are heavier in terms of the total mass of all material recovered: the largest is the 303-kg Bruderheim stony meteorite, a shower of stones which fell in Alberta in 1960, and the second-largest is the Madoc iron, 168 kg, a single metallic mass found east of Marmora in 1854.

The Marmora boulder was examined on 20 June 2003. As the fine photograph suggests, it is a handsome mass of a coarse-grained igneous rock, and probably a local example of a plutonic rock named gabbro. The rock is massive (lacking bands of distinct composition or orientation) and coarsely crystalline, composed of crystals roughly 4 mm in size. The small broken area exposes tabular grains of shiny greyish plagioclase feldspar and dark greenish-black silicates rich in iron, calcium and magnesium (pyroxene, probably metamorphosed to amphibole, and possibly olivine, not identified) and traces of iron oxides. The rock was found submerged in a local swamp, which may account for its unusual surface texture, in which bladed feldspar crystals, etched to a white and frosted finish, stand proud over pits presumably developed where acid swamp waters dissolved the more reactive dark minerals.

A geologist might well summarize this rock as a Grenville-age (circa 1,000 million years) metagabbro, most likely related to the large, smooth boulder located on the south side of the town of Campbellford, southwest of Marmora. That boulder is easy to find, beside Grand Road on the west bank of the Trent canal, in the IODE parkette opposite the Tim Horton's coffee shop.

The boulder was discovered by Mr. Priestley on 4 December 1999. He excavated it from a swamp in southwest Marmora township (Lot 11, Con IV), just south of Beaver Creek above its confluence with the Crowe River near the northeast corner of Crowe Lake. This area is also in the immediate vicinity of the eastern margin of the Cordova gabbro intrusion. The boulder is well-rounded, and thus may have travelled some way down-ice on the Laurentian ice sheet. Ice-flow directions from the N. or N.N.E. offer at least four other major gabbro masses as likely sources within 50 km of the site: the Thanet, Umfraville, Tudor and Lingham Lake gabbros.

So, what is gabbro? Gabbro is a dark "cousin" of granite, formed like granite by slow cooling of molten magma, usually several km below the Earth's surface. The slow process of solidification of the melt permits crystals to grow large, resulting in a mass of coarse crystals visible to the naked eye. Gabbro is dark because it contains more iron and less silica than granite, and typical examples are rich in greenish-black pyroxene and grey plagioclase feldspar, lacking the clear to pale grey quartz, white to pinkish feldspars and shiny mica flakes which comprise the bulk of many granites.

And, why is this not a meteorite? Most meteorites are composed largely of silicate minerals ("stony meteorites" such as Bruderheim, or the small Kitchener meteorite which fell on an Ontario golf course in 1998). A minority of sometimes very-large examples are mostly metal ("iron meteorites" like Madoc) The stony meteorites, unless cut into slices or heavily weathered (very rusty), generally display a thin (roughly 0.5 to 1 mm) fusion crust of material that melted during the meteorite's passage through our atmosphere. This black, glassy crust may be rippled, or cracked or partially flaked away. The stone at Marmora displays a pale, roughened exterior, and a dark interior is visible where a fragment was broken off. This is consistent with a gabbro boulder. If this sample was a stony meteorite, the interior would display certain textures, depending on its type. Most contain shards of shiny nickel-iron metal, and/or yellowish or brownish iron sulphide. Roughly 60 meteorites have been recognized across Canada: the smallest are sand-grain size, the largest a mass of blocks weighing almost one-third of a tonne.

The rock is apparently not a meteorite but is nevertheless quite special, a notable sample of the ancient Canadian Shield, worth pondering in the context of our own modest existence here on Earth. It deserves to retain its prominent location in the school foyer, as it is not only handsome but also has an interesting history. It was; born hot in molten magma, deep in the Earth's crust; came gradually to the surface by forces of mountain building, uplift and erosion; detached at last from a rock outcrop, and carried south in the Laurentian ice sheet, its rough edges becoming rounded in the process; dropped from the ice as the glaciers retreated; lost for a while in a swampy lake margin during human history, acquiring its fine, pale and pitted surface finish. In short, this rock has real character!

Some Tips on Meteorite Recognition

Notes on Local Geology (in progress)