New life for an "erratic" block by the Trent River 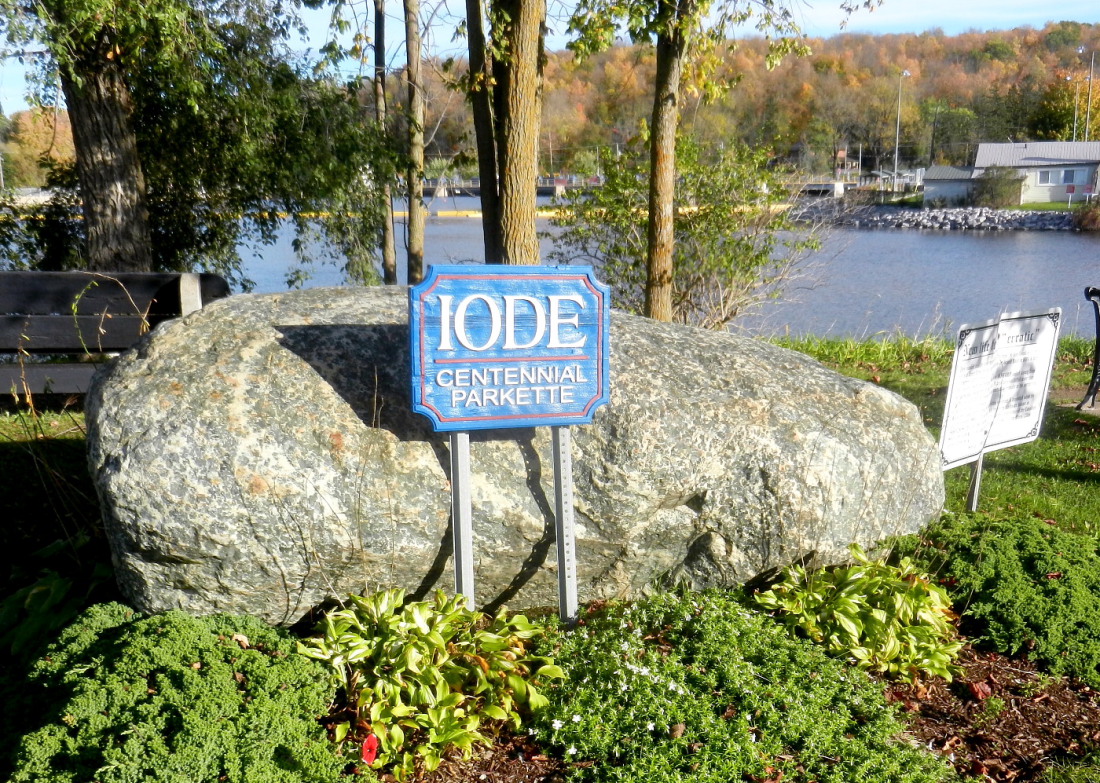 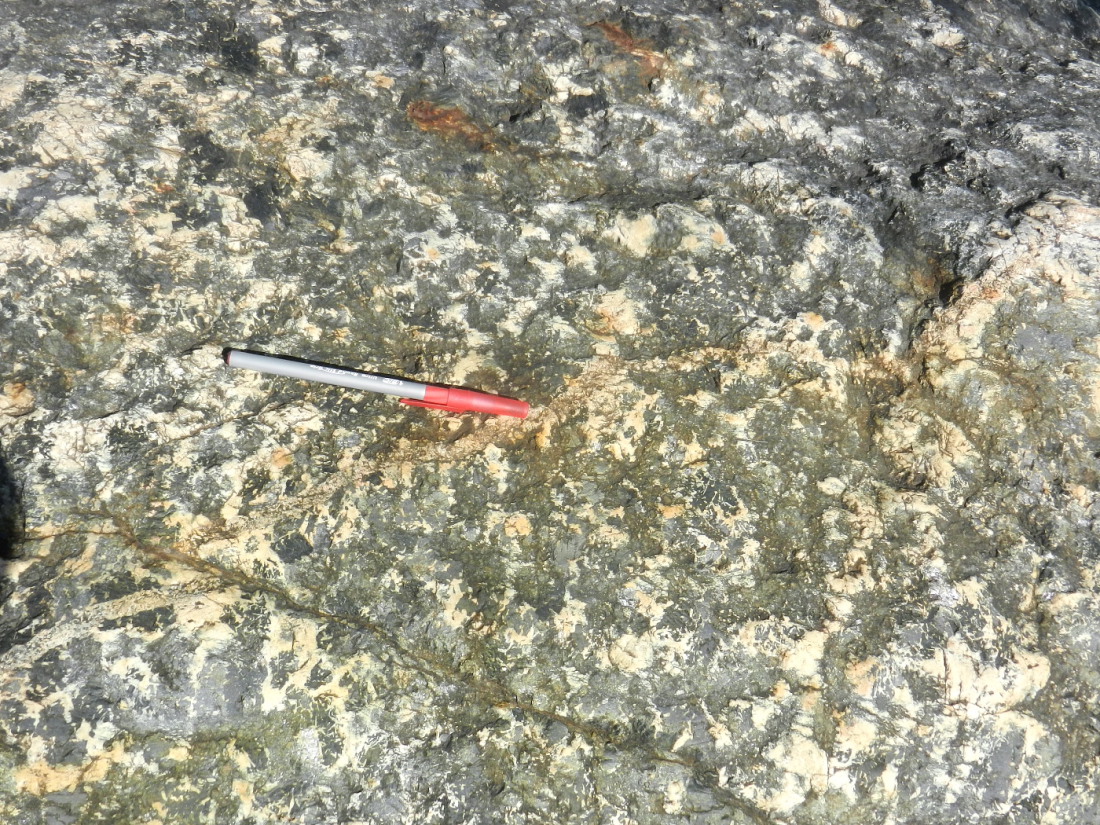 "Rock of the Month # 13, posted July 2002" --- Boulder at IODE Park, new photos taken October 2021. Left: The boulder in the parkette, showing the Trent river and canal flowing around the Lawn Bowling Club at the north end of Trent Island, and the drumlin hills of Ferris Provincial Park in the background. Right: close-up showing the cm-scale crystals. Length of pen is 15 cm. To read the simplified text provided for the sign at the boulder, see the end of this page.

This rounded boulder, 3 x 2 x 1 metres in size and estimated to weigh 12 tonnes, was recovered from a trench excavated just north of the bridge over Trout Creek during the reconstruction of Grand Road in 1999. Behan Construction, working on the road, were unable to demolish the block so, at the suggestion of then-Mayor Cathy Redden, it was moved 200 metres south to its current resting place, on the east bank of the Trent beside Highway 30, just south of Tim Horton's.

Gabbro is relatively common, a coarsely crystalline igneous rock which cooled slowly from molten magma deep within the Earth's crust.It is generally grey, green or black in colour, darker than most granites, which are commonly pink, pale grey or white. This particular boulder may have formed roughly 10-20 km below the Earth's surface, more than one billion (1,000,000,000) years ago.

This is an erratic! What's that? Gabbro does not occur in outcrop in the immediate vicinity of the town. The surrounding area is covered by a layer of younger limestones, seen along the Trent River and in the faces of the former iron mine at Marmoraton. Brought to the surface by slow forces of uplift and erosion, the gabbro almost certainly came to the area in geologically recent times through the action of the Laurentian ice sheets, and was deposited when the glaciers retreated. Such glacier-borne blocks, which can be as large as houses, are known as erratics. The area has other glacial features, such as hilly drumlins in Ferris Park (the background of the photo) and long ridges known as eskers. This erratic came from a source in the so-called Grenville province of the Canadian Shield, north or northeast of town, and may have originated in the area of Cordova Mines, or even further afield.

The rock itself is composed largely of two minerals, pale feldspar and dark pyroxene, both common rock-forming silicate minerals, in crystals often 5 cm in diameter. The two minerals are often intergrown to form striking black-and-white designs. Although the rock contains plentiful iron it is not strongly magnetic. Rust spots are due largely to oxidation of specks of pyrite (iron sulphide, "fool's gold").

Acknowledgements - Thanks to Peter Nielsen (Public Works Director, Municipality of Trent Hills) for the idea of featuring "The Rock" and for background information.

More Notes on Gabbro and Erratics by the Trent River

In general terms, gabbro is like the basalts erupted today in volcanic zones in Hawaii, Mexico, Iceland and elsewhere. The magma is relatively hot and enriched in elements such as magnesium and iron relative to granites (whence the darker colour of the gabbro). Slow cooling, perhaps over millions of years, enables crystals to grow large, unlike the microscopic crystals and glass found in typical basalts.

There are numerous bodies of gabbro and associated rocks in southeast Ontario, including the Lavant mass north of Sharbot Lake, the Raglan Hills east of Bancroft, and several examples between Bancroft and Madoc, near the line of the Old Hastings Road (Easton, 1992; Wilson, 1994).

The Cordova gabbro is about 30 km2 in area, overlain by the regional cover of Paleozoic limestones on its southern side. It displays four "facies" (textural variations) of gabbro, including a layered marginal gabbro (Thomas and Cherry, 1981). The age of the Cordova gabbro is estimated at 1242±3 Ma (million years, Davis and Bartlett, 1988). The edge of the gabbro supported a small gold mine, which produced some 23,000 ounces of gold between 1892 and 1917 (Boyce, 1992). This, although very small production by modern standards, was a record for southeast Ontario. Large outcrops of the gabbro are exposed along roads in the area of Cordova Mines (Easton et al., 1986).

The centre of the gabbro mass is only 23 km north (and slightly east) of the town, a very modest distance for such a block to travel. The principal ice flow direction in the Peterborough drumlin field is mostly 225°, but 190° near Campbellford (Chapman and Putnam, 1984), an estimate consistent with an origin at Cordova. The deglaciation of southeast Ontario occurred roughly 12,500 to 11,500 BP (years before present), leaving the detritus of moraine deposits such as the Dummer moraine at around 12,000 BP (Terasmae, 1980).

The Bleasdell boulder **, alias the "Big Rock", near Glen Miller is a much larger, and probably longer-travelled block of the Canadian Shield, a short walk west of the lower Trent River north of Trenton.

The Campbellford erratic has a number of mineralogical and textural features in common with the Cordova mass: this does not prove the connection, but it seems plausible. The gabbro texture, with rounded intergrowths of silicates 2 to 4 cm (and locally up to 7 cm) wide is referred to as glomeroporphyritic. The key minerals are feldspar (plagioclase) and pyroxene (a clinopyroxene, probably largely replaced by other iron-magnesium silicates such as actinolite and chlorite). Pyrite is the only sulphide seen, and there are small "nests" of needle-like actinolite crystals. The 12-tonne estimate of the mass is derived from a volume of 4.25 m3 and model specific gravity of 2.82.

There are three evident stages in the history of the boulder, prior to its glacial transport to Seymour township:

** The Glen Miller erratic, known as the Bleasdell boulder, is probably the largest erratic I have ever seen! This giant stone is accessed on a fine trail maintained by Paul and Maria Heissler, starting at the Big Rock Cafe, on the west side of the Trent beside Highway 33 between Trenton and Batawa - roughly 10 x 6 x 5 metres in size, it appears to be Grenville marble with veins and patches of coarse quartz. Decimetre-scale marble blocks are surrounded by cm-scale reaction rims of blue-green actinolite. Coarse calcite and patches and bands of pale tremolite are also visible, and the amphiboles in this skarn alteration reach 1-3 cm in length. It is worth a visit, and worthy of being a future "Rock of the Month".

Hoffmann (2012) offers a fine photographic essay on glacial erratics, with the usual excellent National Geographic photography. The examples are from the U.S.A., ranging from Central Park in New York and Mystic, Connecticut to the Colville Indian Reservation in Washington state and Yosemite national park in California. A massive example with an estimated weight of 570 tons, now located in Glen Rock, New Jersey, is thought to have been brought about 20 miles (32 km) from source. Some of my own favourite erratics, also weighing many tons, are anorthosite blocks scattered around the margins of their source in the Adirondack Mountains of upstate New York (Miller, 1917).

THOMAS,PB and CHERRY,ME (1981) The geology of the Cordova gabbro and its associated gold deposits. Ontario Geological Survey Misc.Pap. 100, 251-253.

New life for an "erratic"

This rounded boulder is estimated to weigh 12 tonnes. It was found in a trench north of Trout Creek during the reconstruction of Grand Road in 1999, and moved 200 metres south to this site.

The coarsely crystalline igneous rock, known as gabbro, cooled slowly from molten magma deep within the Earth's crust. It probably solidified more than one billion (1,000,000,000) years ago, and was eventually brought to the surface by slow forces of uplift and erosion.

Much later, it was carried along by the Laurentian ice sheet, and deposited when the glaciers retreated, some 12,000 years ago. Such ice-borne blocks are known as erratics. This one came from a source in the Grenville province of the Canadian Shield. It is similar to rocks which form outcrops around Cordova Mines, 25 km to the north.

Visit the "Local Features" section of the site.

Rock of the Month index page