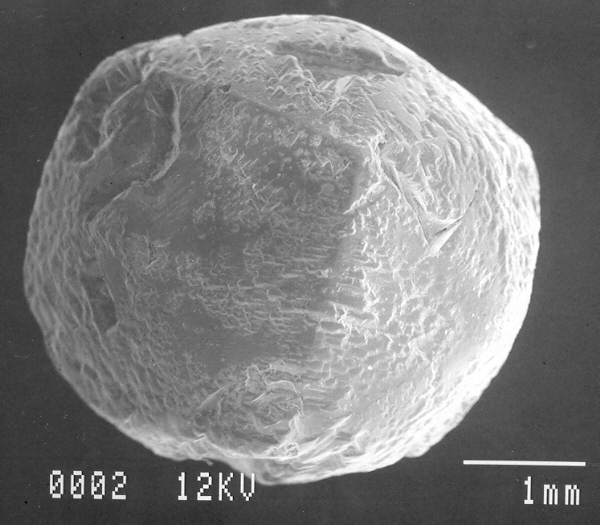 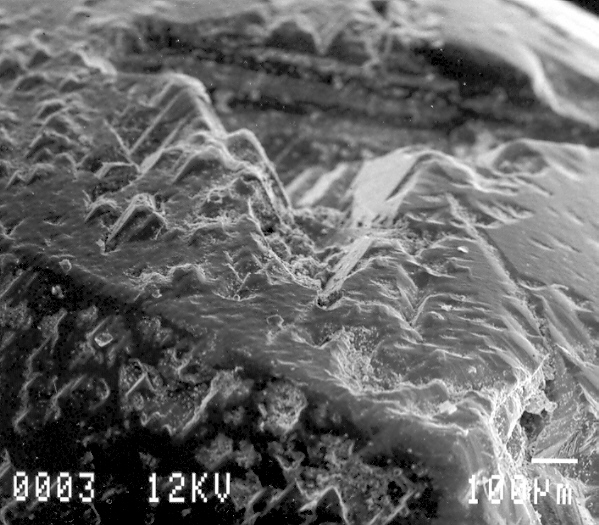 Left: 1. A rounded "ballas" crystal seems to give the lie to the concept of cubic symmetry, being so much nearer to a sphere than a cube! This is a 5x5x5-mm, 0.65-carat white diamond, with delicate curved faces and interesting etched surfaces. SEM view - a secondary electron image at very low, 18X magnification, scale bar 1.0 mm, working distance 29 mm.

"Rock of the Month # 25, posted for July 2003" Samples 2376 (rounded ballas stone from South Africa) and 2375 (macle twin from Sierra Leone). Rough diamond specimens supplied by David New of Anacortes, WA. Photography on JEOL-840 scanning electron microscope at the Department of Geology, University of Toronto, with technical assistance from George Kretschmann and Claudio Cermignani.

The diamond, cubic native carbon, needs little introduction. Although the human history of diamond is shorter and more localized than that of gold, this hardest of natural materials has caught the popular imagination in little more than a century. Prior to the Kimberley finds in South Africa, most diamonds of note found their way to the crown jewels of royalty, coming first from India and then from Brazil. For further detail, see Harlow (1998) and Hart (2001). A vast amount of scientific and commercial effort has gone into understanding the diamond, in terms of mineral exploration, gemmology and materials science. This short note provides a look at two modest but interesting examples of this remarkable mineral.

1. Octahedral growth (the stable shape of most natural gem diamonds),

2. Cuboid growth (not of cubic faces, per se, but growth `along an undulating surface of mean orientation corresponding to a cube face' - a small proportion are of gem quality), and

3. Fibrous growth (opaque fibrous aggregates growing in the octahedral orientation, due to supersaturation of carbon and/or the presence of numerous inclusions). These are never of gem quality although they may occur as overgrowths on gemmy stones.

The Cape province of South Africa is famed for both fluvial and marine placers. The primary kimberlites have been dated at 135 to 65 Ma, i.e., spanning the Cretaceous period. Some of the diamond mines work paleochannels which represent concentrations of the alluvial diamonds (McDougall, 1998). The region contains some major diamond deposits, and the host rocks serve as a famed source of samples of Earth's mantle (e.g., Clarke and Pe-Piper, 1983). Ballas diamond is fibrous, and grew very rapidly: it may have formed just prior to kimberlite emplacement, unlike gem diamonds (Gurney, 1995). 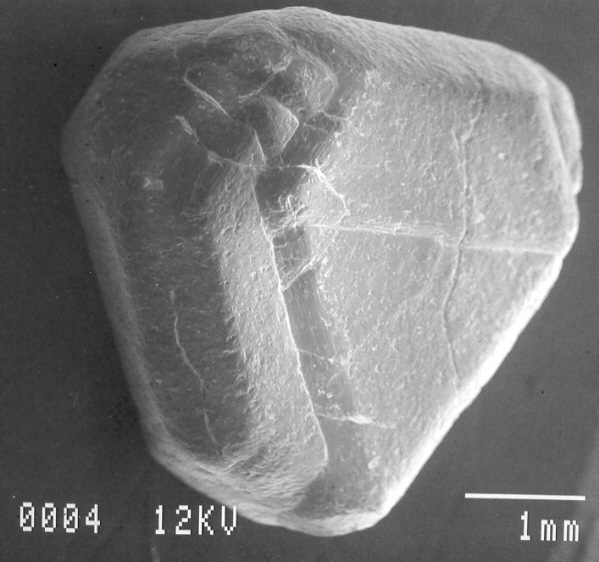 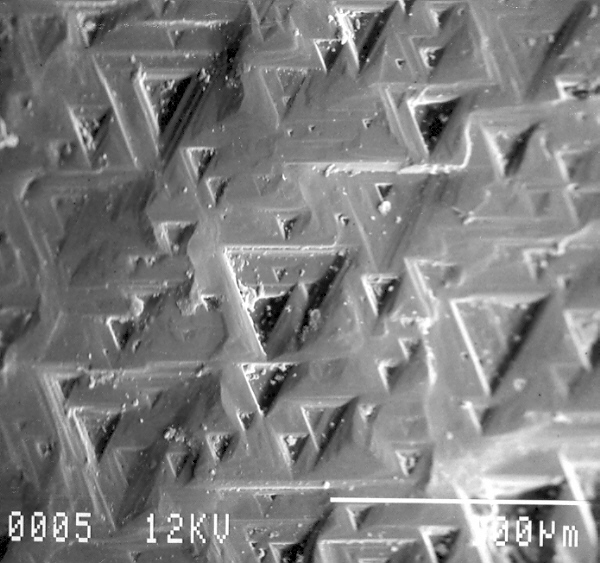 Right: 4. A close-up of the surface of the same stone, part of the ledge visible on the left of the main `table' of the stone. revealing triangular cleavage pits reminiscent of galena, the humble lead sulphide. This widespread, dense, metallic grey ore mineral is very soft, in complete contrast to diamond, but shares cubic symmetry, and similar pits are seen in relief in galena grains in polished specimens. SEM view - a secondary electron image at 350X magnification, scale bar 0.1 mm, working distance 22 mm.

Blessed with a range of economically interesting rock types, Sierra Leone is known for diamond occurrences both in alluvial deposits and in parental kimberlites (see, e.g., Haggerty et al., 1990). The curse of the diamond is surely its portability combined with extreme market value. The trading of "conflict diamonds" as currency by armed groups has fuelled resource wars in sub-Saharan Africa (Renner, 2002; Cockburn and Wolinsky, 2002; and especially Campbell, 2002). This scourge is at last receiving attention. Perhaps the research invested in diamonds in the past fifty years will provide some forensic tools with which to identify and stem the illicit trade.

HART,M (2001) Diamond, a Journey to the Heart of an Obsession. Penguin Books Canada Ltd, Toronto, 276pp.