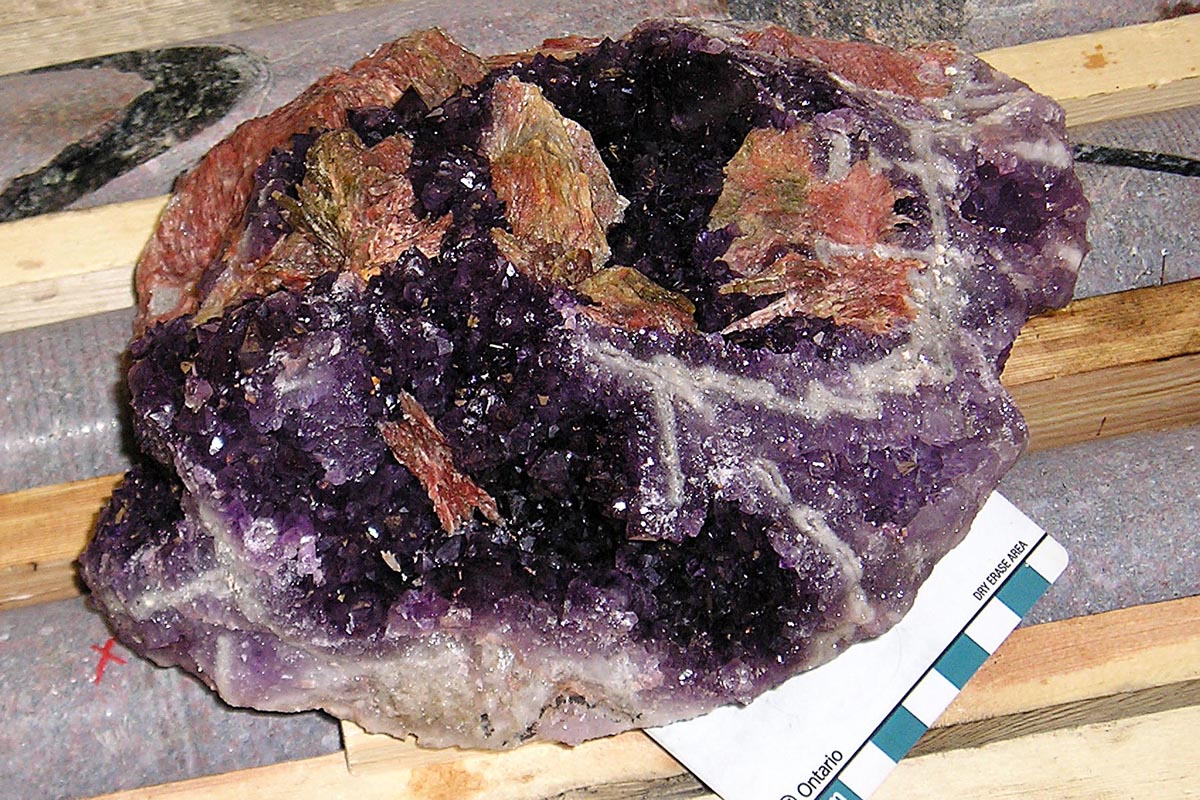 "Rock of the Month # 73, posted for July 2007" --- This sample is a particularly intensely purple amethyst, on which are superposed rosettes of tabular bladed crystals of green to orangey barite. 16x14x8 cm, 3467 grams. This sample was mined and prepared by Boulder Creek Amethyst Mines.

Amethyst is an attractive semi-precious member of the quartz family, bulk composition SiO2. As such it is hard, and suitable for tumbling and cutting to yield beads and other shapes for jewellery and lapidary purposes. The occurrences in the Thunder Bay region are particularly well-known, and have been described in detail (Vos, 1976; Garland, 1994). On a world scale, amethyst is widely distributed, with a majority of specimens originating in Brazil (including some huge banded geodes) and Ontario. It occurs also throughout the USA (e.g., White and Cook, 1990), in several states of Mexico, and elsewhere. Most amethyst mined in the Superior region is recovered near the lakeshore northeast of the city of Thunder Bay, east from Loon to Black Bay on the north side of the Sibley Peninsula (Elliott, 1982). Much of the material is collected in the vicinity of McTavish and MacGregor townships (including Loon, Pearl and Dorion), with additional specimens extracted both closer to Thunder Bay and also further eastward to Rossport and the Schreiber-Hemlo district. This "amethyst belt", is roughly 40x200 km in extent, with amethyst in crystal-lined cavities in fault-controlled veins and breccias (Wilson, 2007). Amethyst is the official "provincial stone" of Ontario.

The amethyst-bearing silica veins are typically in fault and breccia zones separating Archean granitoid rocks (monzonite, granodiorite, etc) from Proterozoic Sibley Group sediments (Garland, 1992, 1994). Thus the amethyst may enclose blocks of diverse rock types, such as banded stromatolite fossils from the Sibley sediments, and reddened granitoid host rock. In addition to the attractive barite, accessory minerals may include small shiny cubes of galena, and small equant crystals of a pale green sphalerite. Coarse rhombohedral calcite is also abundant in some of the cavities. Stable-isotope and fluid-inclusion studies suggest that the amethysts formed from basinal brines expelled from the Sibley Group sediments at quite low temperatures, <100°C (McArthur and Kissin, 1988; McArthur et al., 1993). The amethyst encloses fragments of Sibley sediment of estimated age 1339 Ma, which is thus an upper estimate for the age of the amethyst. Given the importance of voluminous flood basalt magmatism in both the southern Brazilian amethyst-mining region and in the Thunder Bay district, one may wonder whether the Ontario amethyst was formed during the Midcontinent Rift magmatic episode (circa 1100 Ma), a prolific generator of hard basalt, diabase and related intrusive rocks. These igneous rocks dominate the scenery from Duluth, Minnesota to the Lake Nipigon region northeast of Thunder Bay, and are also prominent in the landscape of the Keweenaw copper-mining region of northern Michigan. However, an origin involving Sibley basinal brines would push the date of amethyst formation back by 200 million years.

The colour of amethyst has long been attributed to substitution of small amounts of iron for a trace of the silicon, and to low-level natural irradiation of the silica (Dennen and Puckett, 1972; Xiong and Kissin, 1993). Amethyst deposits may also on occasion display greenish quartz (Hebert and Rossman, 2008). The colour of the best amethyst is naturally intense, as demonstrated by the specimen illustrated here. However, the world of semi-precious and precious stones is full of ingenious human "enhancements" to the colour, clarity, and of course cut (shape, size) of a finished gemstone. Such treatments are generally considered legitimate, provided that buyer and seller are both aware of the process involved, and much sub-standard material may thereby be rendered attractive and suitable for use in jewellery. Possible processes of enhancement for amethyst in the Superior region have been investigated (e.g., Dutrizac, 1995).