Based on 90 observations in Seymour township, Northumberland county, southeast Ontario, 1999-2003.

This particular species of starling is widely distributed around the world, in part as a beneficiary of human activities both intentional and accidental (Bent, 1950). It is one of 108 species of starling, all native to the Old World (Whitfield, 1988, pp.206-207). As an alien species it can cause damage to native birds and to crops, and great efforts have been made to keep it out of isolated and sensitive areas, such as the wine-growing region around Perth in Western Australia (Nixon and Collis, 1992; Holmes, 1998). It may aggressively drive other species from nest holes and bird feeders (Stokes, 1979, pp.224-235). The brash and lively demeanour has however won the bird many friends (see, e.g., Goodfellow and Hayman, 1983, pp.70-74; Corbo and Barras, 1983). Peter Whelan recounted one unusual case where eastern bluebird chicks were fed by a starling in New Brunswick (Whelan, 1983).

It is a hardy bird, seen in the area in every month of the year, but most abundant from May to October. It is likely that larger winter populations live in slightly warmer urban areas to the southwest during the winter, both at lakeshore sites (e.g., Cobourg) and in the big city (Toronto region). It is a gregarious species, and will often roost in large colonies in mature trees. The dense flight of a starling flock is seen most often at twilight. In this area substantial flocks, often 100 to as many as 500 birds, are to be expected in March and April, and again in September and October.

The starling is a common to abundant migrant and summer resident at Presqu'ile provincial park, roughly 40 km to the south, and an uncommon winter resident (LaForest, 1993, p.296). Most of the winter birds are seen at feeders along Bayshore Road on the edge of the park. In Peterborough county to the north and northwest, it is an abundant year-round resident, often seen in large flocks, especially in mid-October. It is said to be notably `aggressive and opportunistic, and often displaces native birds such as the flicker and bluebird' (Sadler, 1983, p.128). 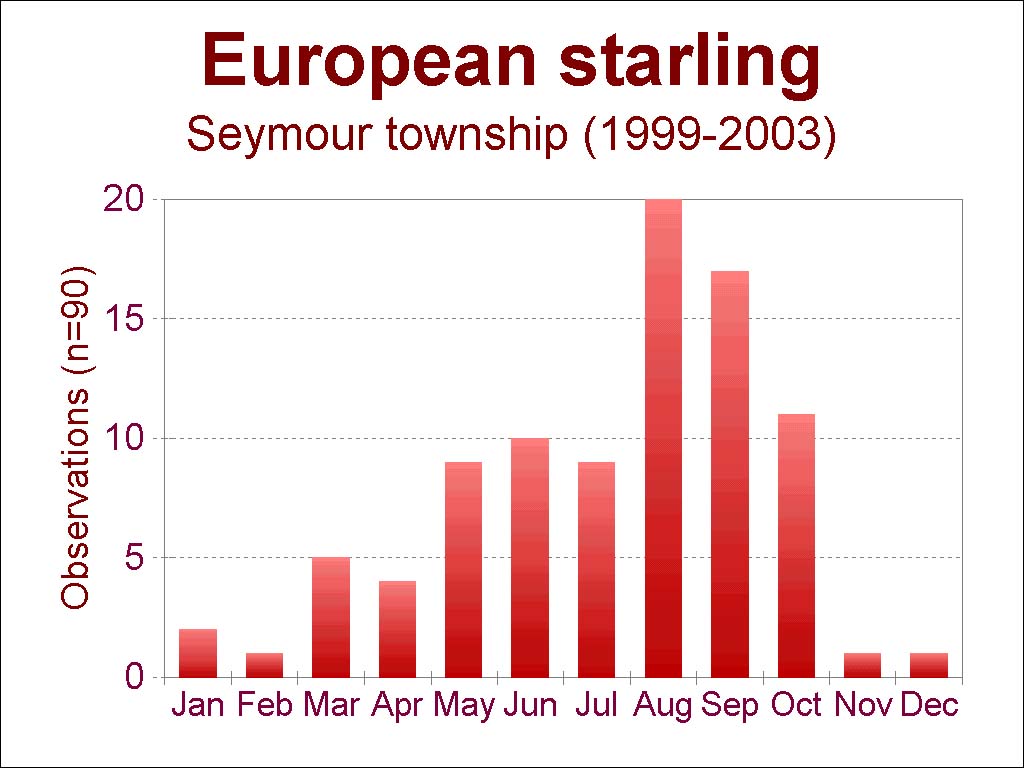 WHITFIELD,P (editor) (1988) The Macmillan Illustrated Encyclopedia of Birds, a Visual Who's Who in the World of Birds. Collier Books, Macmillan Publishing Company, New York, 224pp.