Based on 96 observations in Seymour township, Northumberland county, southeast Ontario, 1999-2004.

Surprisingly low totals for this common summer resident have been boosted by further sightings in 2003 and especially in 2004. Sightings are distributed between 02 March and 23 October, with only five recorded sightings after July. Forty-one sightings were made between 14 March and 15 August 2004 (at least one female blackbird was noted in the Bannon Road marsh on the afternoon of August 15th). Sightings tailed off from May until 15 August, and then a male was seen and heard calling in a marsh on 23 October, with frost on the ground!

The birds are readily seen and heard in wetland habitats during the summer, in bushes and meadows near watercourses.

The blackbird is a common migrant and abundant summer resident from late March to late November at Presqu'ile provincial park, roughly 40 km to the south, with an extreme early sighting on 22 February and average departure in mid-November. Large flocks may be seen over the marshes in the fall, the largest recorded exceeding 2,000 birds, on 25 October 1988 Only five winter sightings have been reported on the Presqu'ile peninsula, although the birds overwinter at corn cribs in the Brighton area (LaForest, 1993, pp.369-371). In Peterborough county, to the northwest, the red-wing has been noted as early as 21 February. In spring, the males usually arrive 2-3 weeks before the females. Most leave by early November, but a small number overwinter in the county (Sadler, 1983, pp.155,182). 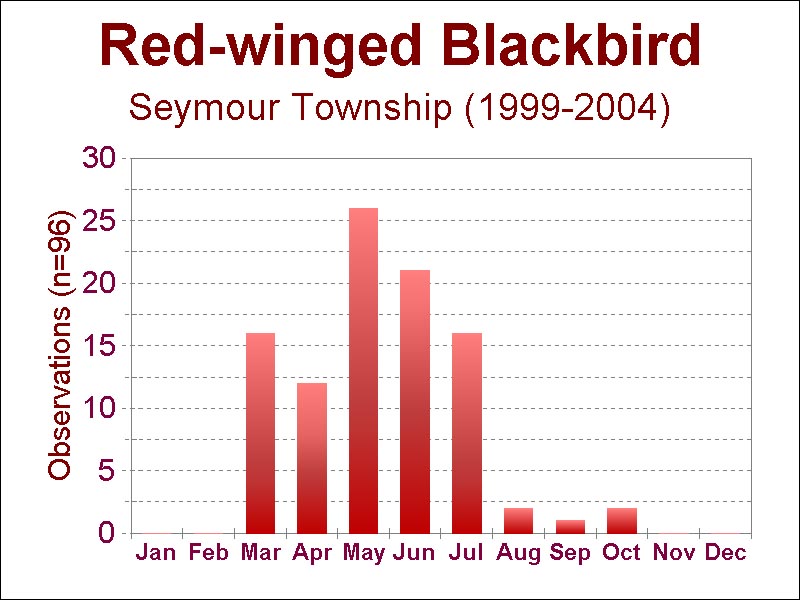