Based on 187 observations in Seymour township, Northumberland county, southeast Ontario, 1999-2020.

The rufous up-side tail feathers of the red-tailed hawk are not always visible, but it is often the shrill cry that draws attention to this imposing raptor. Around Campbellford the red-tailed hawk is a year-round inhabitant of the township. The period of peak sightings seems to vary from one year to the next, though on average May leads year-round. The bird is generally seen alone, but occasionally in pairs. A bird may stake out a particular field and perch repeatedly on the same preferred viewpoint, such as the high branches of a dead tree. The occasional selection of a prominent perch visible to the observer probably accounts for most months in which the species is noted on more than 3 or 4 occasions.

At Presqu'ile provincial park, roughly 40 km to the south, the red-tailed hawk is said to be an uncommon spring migrant (early March to early May), common fall migrant (mid-August to late November) and rare summer and winter resident, breeding in the park (LaForest, 1993, p.108). In Peterborough county, to the northwest, the hawk is said to be the common large hawk of the area, a summer resident which has been known to overwinter (Sadler, 1983, p.62). Overall, the red-tailed hawk is one of the most abundant and widespread raptors in North America. The mixed woodlands and fields of our area are a suitable habitat. It is widely distributed throughout the heavily agricultural south of Ontario (Cadman et al., 1987, pp.124-125). The species has remained abundant over the past three decades, and is particularly numerous south of the Canadian shield (Cadman et al., 2007, pp.184-185). The latest atlas shows the red-tail to be especially concentrated between southern Lake Huron and the north shore of Lake Erie, and eastwards from Rice Lake past Kingston to the St. Lawrence waterway. 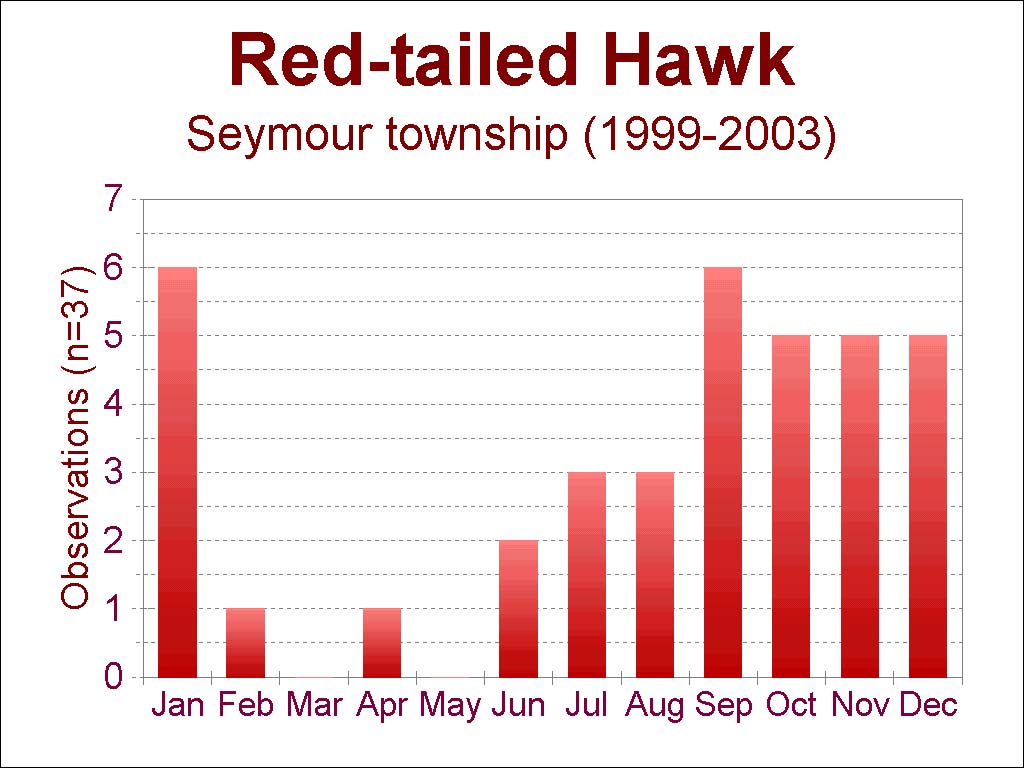 You may note a drastic reduction in sightings since 2014. One possible explanation is purely local, and not necessarily a reflection of the species as a whole. For years, many sightings were made of hawks perched on a dead tree west of town, surveying the meadow and stream bank nearby. It may be that the death of one or two individuals broke this "chain of habit" and accounts for the evident disappearance. A similar scenario may apply to the osprey (latest decade of data not compiled at time of writing), wherein the removal of one nearby nest platform made random, close-to-our-home sightings less likely.