The American robin is actually a thrush, the largest and most abundant thrush species in North America. It is not related to its namesake, the smaller "robin redbreast" of Britain and continental Europe (Erithecus rubecula). Though, as we shall see, the robin may overwinter in or near our area (given a good berry crop, and relatively mild conditions), its numbers rocket as the snow retreats, and it is thus a beloved harbinger of spring.

In this area the robin is mostly seen between about the 06 March and 11 November. The robin seldom lingers past about 25 October. On this date in 2002, after a sharp frost which shrivelled the last of the local shaggy mane mushrooms, a flock of 21 migrating robins was seen in dead trees beside Trout Creek. The three latest sightings in 1998-2003 were on 10, 11 and 30 November. Another flock seen in fall migration was noted on 19 November 2017. A single good winter sighting was made on 17 January 1999 (plus a possible sighting one 23 January, not counted here). Thus the robin may be found year-round, but only 2 percent of sightings occur in the four months November-February.

It should be noted that the robin is amongst the most familiar and abundant birds in the area, notwithstanding its distinct seasonality, with few sightings for those four winter months. Amongst birds profiled for 20-plus years to date, the mourning dove is the only close rival for visibility, followed by the winter junco and the grackle. When all the data are sorted, there will be few rivals (the blue jay, perhaps?) in abundance for this cheerful three-season garden bird.

The robin is a very common spring migrant (early March to early May) and a common fall migrant (early September to mid-November) at Presqu'ile provincial park, roughly 40 km to the south (LaForest, 1993, pp.283-285). A few sightings have beem made in December, January, and February (with a possible "earliest returnee" on 22 February 1976). It nests throughout the park. Our suspicion is that the robin, though it may vanish for 4 months or more from Campbellford and points north, in fact may retreat just a few km or tens of km to the south, from Meyersburg past Codrington to Brighton and Presqu'ile.

Wonders of a local bird count

A note about the 41st Annual Presqu'ile Christmas Bird Count, held on Sunday 18 December 2005. 32 volunteers counted 14,285 individuals of 77 bird species, as reported by Doug McRae (The Independent, 21 December 2005, p.34). The 15-mile radius centred near Boat Harbour was divided into 11 areas for the purposes of the count. Highlights included a yellow-headed blackbird. An additional six species were noted during the count week. The 83 species included 10 species of duck, 10 birds of prey, 4 owl species, as well as American robin (59), cedar waxwing (80), snow bunting (431) and American goldfinch (225). Just a year later, the mild early winter led to a spectacular Christmas bird count on 17 December 2006, around Presqu'ile park and the harbour at Brighton, as reported once more by Doug McRae (The Independent, 20 December 2006, p.5). 87 species were logged, plus 7 more seen in the 3 days before and 3 days after the count. A selective note of the finds included 9 northern shrikes, 9 eastern bluebirds, 81 American robins, 195 cedar waxwings, 204 juncos, 3 snow buntings, 50 golden-crowned kinglets, 358 American tree sparrows, 8 horned larks, 13 red-winged blackbirds, and 266 American goldfinch.

The bird is also very common in Peterborough county, to the northwest, with the usual range listed as 02 March to 03 November (Sadler, 1983, pp.123-124), although birds may stay later if the berry supply is good. The earliest returning bird may have been on 29 January 1983, "in that phenomenally mild winter".

The robin is widespread, and a prolific breeder, across much of north America, from Alaska to Newfoundland to Mexico. It is common in New York state, from city parks to forest clearings (Levine, 1998, pp.441-442). It is common in the greater Kingston region (Weir, 1989, pp.355-357), where on the average males are found to return by 07 March, about one month before the females. Come October, large flocks are often seen moving south in daylight, most of these flocks having passed to the south by 15 November. Province-wide, the robin breeds almost right across Ontario (Cadman et al., 1987, pp.330-331; 2007, pp.442-443). It is especially abundant, indeed, almost uibiquitous, on the limestone platform, the country south of the Canadian shield. 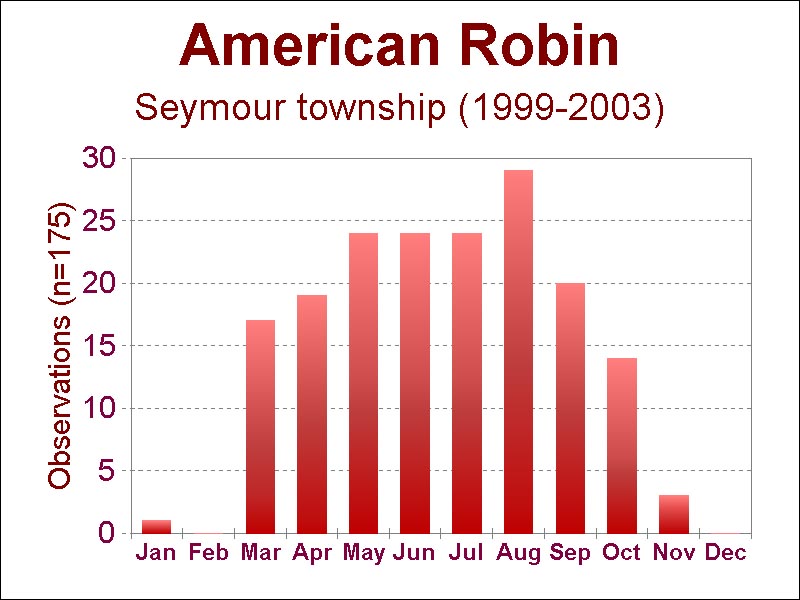