Based on 1083 observations in Seymour township, Northumberland county, southeast Ontario, 1999-2020.

The slate-coloured (alias dark-eyed) junco often appears in small flocks in winter, engagingly active and swift-moving in fields and gardens, alighting on the snow and soon in flight once more. In times of old, it was commonly referred to simply as a snowbird, though the Latin and English name junco has been in scientific parlance for over a century (Pearson, 1917). In midwinter the junco is a fixture at (or more usually under) bird feeders, feeding on mixed seeds. In our garden, these attractive little birds prefer to flit from hedgerow to old wooden feeder platform, to the spilled seed on the lawn, and occasionally to the narrow perch around a modern metal seed feeder. Seldom if ever idle, in near-constant motion, counting the juncos can be a challenge. In January-February 2019, anything from 1 to 8 juncos were seen in the garden on 36 out of the first 50 days of the year (since we were away for 8 days, make that 36 of 42 observing days). This distinctive sparrow seldom breeds south of the Canadian shield, and thus is rarely seen in summer in southwest Ontario, or close to the north shore of Lake Ontario.

The histogram below shows the incomplete knowledge of the bird as of the end of 2003, with just 30 observations. The picture as glimpsed at first was of a short winter season, 23 September to 20 January and subsequent northward migration, 26 March (2003) to 11 May. The birds are not seen at all during the summer months, consistent with nesting in woodlands further north from the Trent valley. 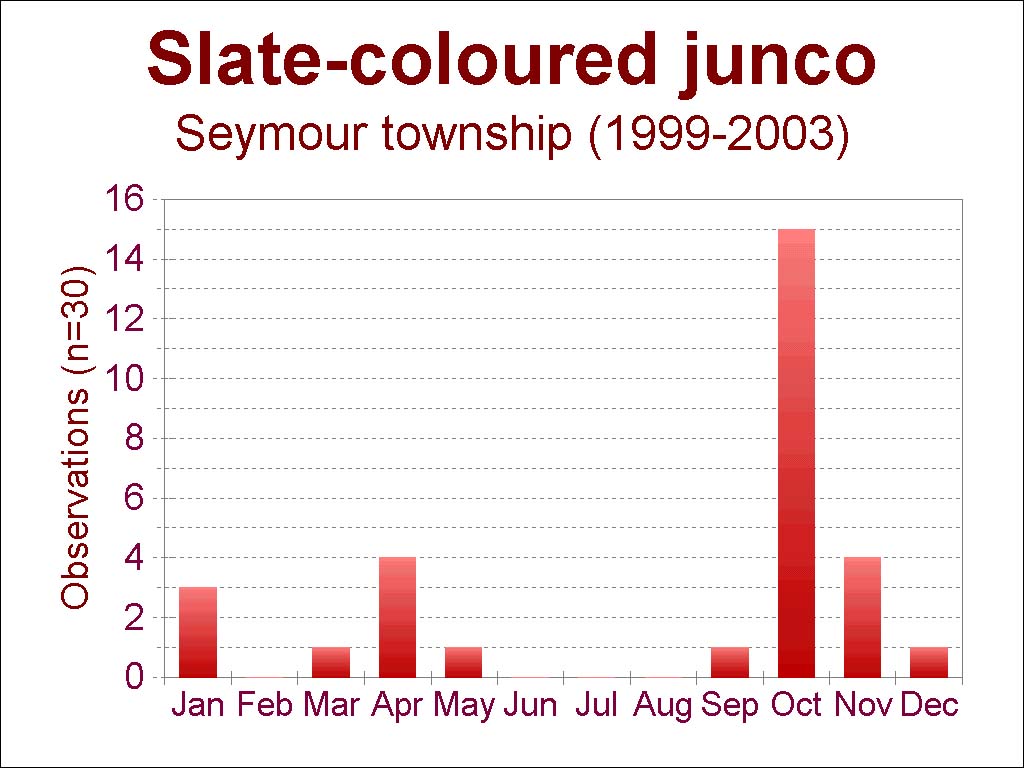 In comparison, using 1083 observations over 22 years, a more complete pattern emerges. Data from 2009-2020 indicate that migrating birds nowadays constitute no more than an October "shoulder" to the main overwintering population. Just six observations occurred in and close to the midsummer months (9 May, 11 May, 16 August, and 18, 23 and 30 September), less than 1 percent of the total. In spring, the last remaining birds (of the "99 percent", those that definitely leave) depart for summer breeding grounds to the north, no later than 23 April. They return gradually in the fall to overwinter. with the first arrivals generally around the 03-16 October (rarely noted as early as 30 September or as late as 01 November).

At Presqu'ile provincial park, roughly 40 km to the south, the junco is a common spring migrant (late March to mid-May) and abundant fall migrant (mid- September to early November). There are three summer records, and the bird is also an uncommon winter resident (LaForest, 1993, pp.364-365). In Peterborough county, to the northwest, the junco is a common migrant which also overwinters, and some stay in the summer, mostly in the north of the county (Sadler, 1983, p.153; Cadman et al., 1987, pp.464-465). The presence of "visiting" birds makes it hard to determine migration times, but suggested ranges are 06 March to 16 May in spring, and 16 August to 20 October in the fall. The bird typically starts nesting in Ontario in the second half of April, and in summer is most abundant in the far north of the province, in the northern Hudson Bay Lowlands (Cadman et al., 2007, pp.572-573).

Here is a fine new (January 2021) 10-minute video on
"Dark-eyed juncos - fun facts about their winter habits" by Lesley the Bird Nerd.