Based on 54 observations in Seymour township, Northumberland county, southeast Ontario, 1999-2013.

The low total of sightings for this species, and the nature of the seasonal distribution, are in this case no doubt influenced by the location of the observers. Had a hummingbird feeder been installed each and every year in a prominent place, a great many more sightings could be expected. The early sightings (1999-2003) are accordingly split between feeder stations (striped column, n=8) and miscellaneous locations (in gardens and in rural settings, shaded column, n=9).

The season is short, from 07 May to 02 September, barely four months. Sightings evidently peak in the first month and decline thereafter, perhaps a reflection of the rising availability of wildflowers after the scant offerings of April and early May. Given that we were away during mid-May for 10 days or more in at least 10 of the 15 years reported, the predominance of May sightings is almost certainly under-reported. In 2014, the first hummingbird, a female, appeared at a newly-installed nectar feeder on 14 May, and a male visited 3 days later.

The histogram below shows the incomplete knowledge of the bird as of the end of 2003, with just 17 observations. However, the short season for this summer visitor is affirmed by the latest compilation of 54 observations.

This species, the only hummingbird found across southern Ontario on a regular basis, is a common migrant and a breeding summer resident at Presqu'ile provincial park, roughly 40 km to the south, from early May to late September. It is found from 01 May to 26 September, with migration peaks in late May and mid- to late August (LaForest, 1993, p.222). In Peterborough county, to the northwest, the hummingbird is most often seen from 01 May to 01 October, and most exceptionally as early as 17 April and as late as 01 November (Sadler, 1983, pp.100). 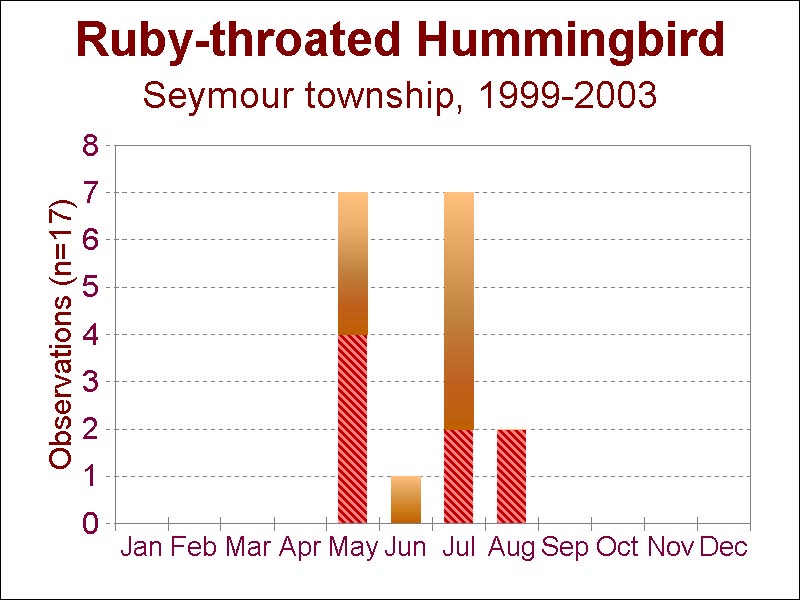