from the Grenville province of Ontario 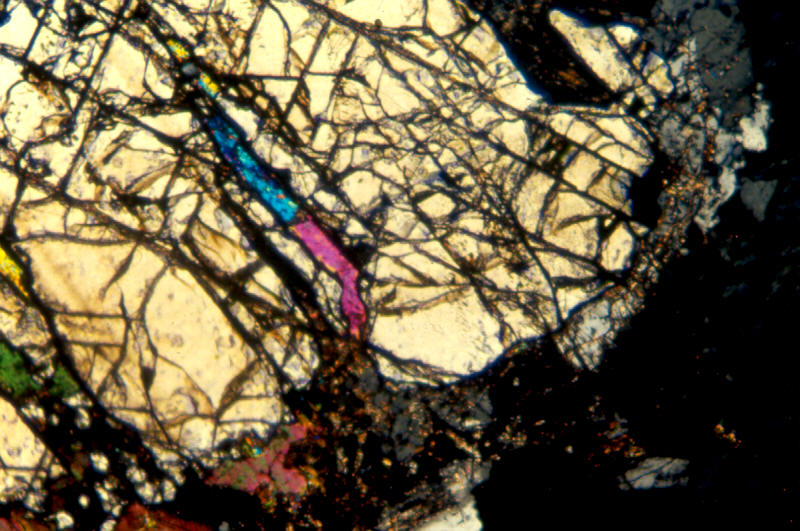 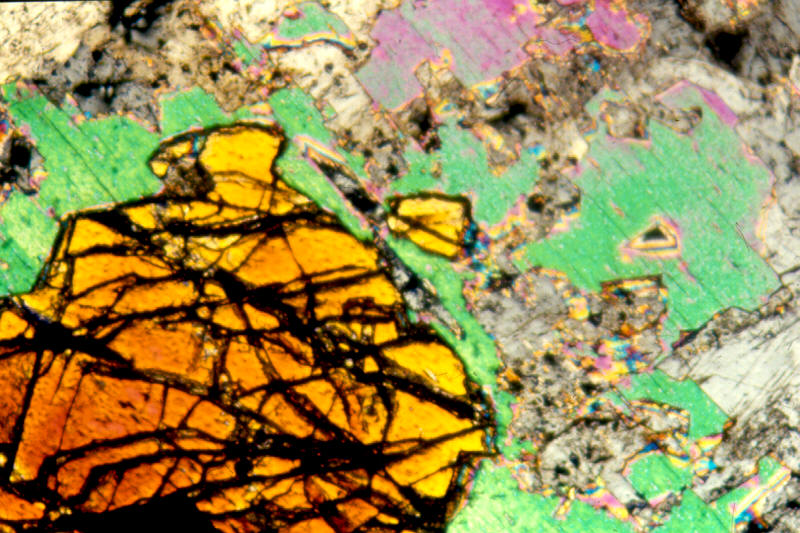 Figs. 1-2. The mineral corundum, noted for its hardness (9 on Moh's scale) is both a gemstone (ruby and sapphire) and an industrial mineral, an abrasive. The material here was formerly mined for its industrial uses. These two photomicrographs are both at nominal magnification 40X, long-axis field of view 2.8 mm, in crossed-polarized transmitted light.

Corundum (Al2O3) is a simple oxide, an hexagonal mineral whose crystal habit varies from tapering prisms to stubby barrel- or plate-like forms. Brittle yet tough, and very hard, it occurs in igneous rocks, such as nepheline syenites and pegmatites, and in metasedimentary schists and marbles. The photomicrographs (Figs. 1-2) clearly show the high polishing relief of this exceedingly hard mineral.

The hand specimen (2055, Fig. 3) shown below is a massive corundum syenite from the Lily Robertson (Cooney) occurrence, southwest of the Princess sodalite mine in Dungannon township, east of Bancroft. This is a small site on the northwest side of Robertson Hill, opened by Louis Moyd circa 1947-1948. The rock is moderately to essentially non-magnetic, grain size 1 mm to >10 mm, colour index 15% (10% fine-grained biotite and 5% dull greasy brownish-grey corundum, in prisms to 20 mm). It is composed largely of white feldspars and lesser grey nepheline.

The photomicrograph of 2055 (Fig. 1, above left) displays coarse corundum invaded by a scapolite-filled fracture, in a matrix of alkali feldspar. Besides microcline and plagioclase, the section displays the corundum (some crystals appear to be zoned), biotite mica, and accessory phases including scapolite, calcite, magnetite, hercynite, pyrite and (?) zircon.

Sample 2059 (Fig. 2, above right) is a coarse corundum syenite from Burgess corundum mines, southwest of Combermere in Carlow township. This sample is from the Logan Cut, and it is dominated by alkali and plagioclase feldspar, with abundant biotite and corundum, plus muscovite sheaths around the corundum, and accessory magnetite, zircon and hematite. Similar material is also seen at the best-known and overall most prolific site in the district, the Craigmont corundum mine in northwest Raglan township, on the steep flanks of Craigmont Hill, above and west of Conroys Marsh and the York River, south of Combermere. 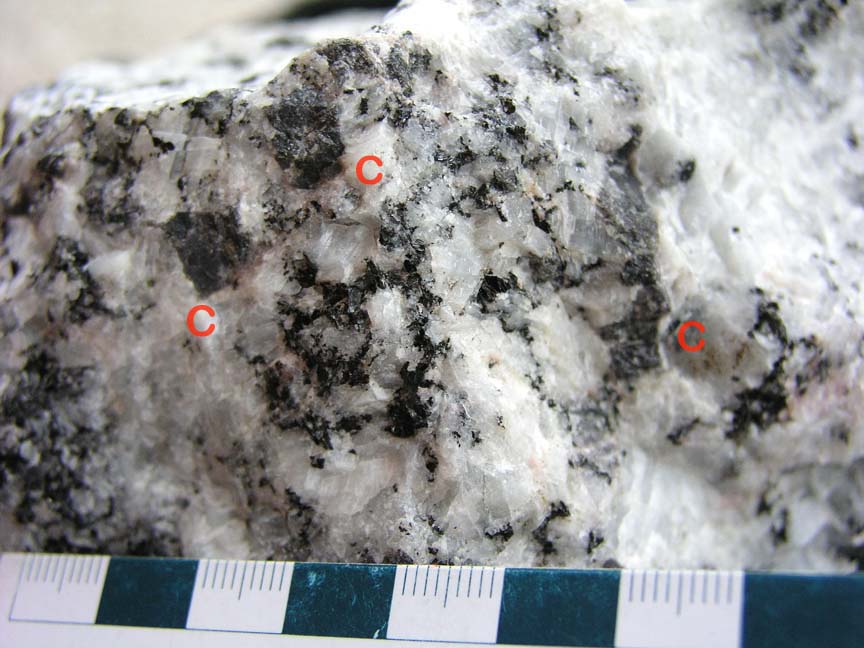 Corundum is very well-documented, particularly for its gemstone forms (sapphire and ruby, together with the emerald form of beryl, are the "big three" species in the coloured stone trade, subject to steady demand). MINLIB, by early 2021, contained some 949 articles relevant to corundum, of which 113 (almost 12% or 1 in 8) relate to the Grenville province. The corundum occurrences in southeast Ontario occur near Sharbot Lake, the Blue Mountain mine, and the Bancroft belt of alkaline igneous rocks, from which the featured samples were collected. A century ago, the area was the world's biggest producer of abrasive corundum, which was mined in ledges on hillsides and open pit mines, from syenites which often contained 10 percent or more of the tough mineral. A point of historical note is that Willet Green Miller, first provincial geologist of Ontario, wrote an early article on using glacial boulder trains in mineral exploration, citing the distinctive, resistant corundum-bearing boulders from the Bancroft area.

For a contrasting view of this mineral, see the earlier "corundum"

Rock of the Month Index