Based on 88 observations in Seymour township, Northumberland county, southeast Ontario, 1999-2003.

The Canada goose: love the goose as a national symbol; marvel at its migratory antics; hate the park-loving flocks for the mess they leave in public spaces. The goose is seen in largest numbers during the protracted southward migration, in September to December. Small flocks and individuals appear to overwinter in the Trent Hills area. Migrating birds are less conspicuous in the spring, and in fact only occasional sightings are made from Christmas until the end of April. 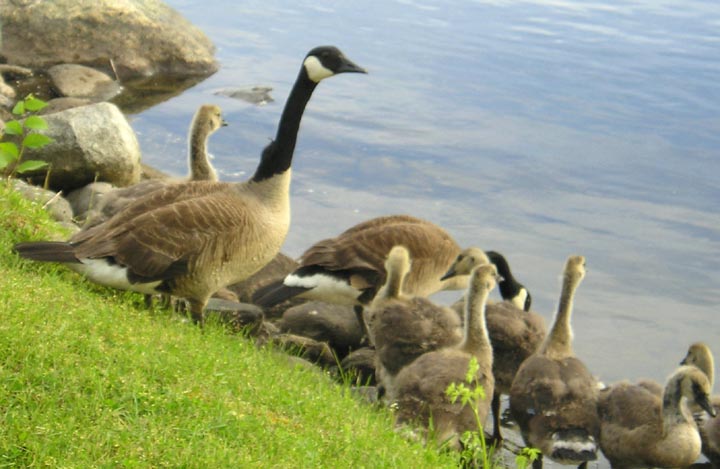 An escaped domestic goose was the constant companion of a Campbellford flock for a number of years, possibly migrating with them in the winter. On 23 May 2003 an "odd couple" was seen in small ponds southwest of the town: a Canada goose with a much smaller male blue-winged teal. Starting in 2002, a small group, with a kernel of just two pairs, adopted the stretch of the Trent canal upstream of locks 11-12 as their summer home: these birds with their dozen-or-so fast-growing goslings are especially easy to see in June and July. The photograph shows some of this group, then 5 adults and 12 goslings, on 11 June 2004.

This common goose is an abundant spring migrant (mid-March to mid-May) and common fall migrant (mid-September to early November) at Presqu'ile provincial park, roughly 40 km to the south (LaForest, 1993, pp.59-60). The bird's status in the park is occasional in winter, and very uncommon as a breeding summer resident. Over 2,000 birds per day may be counted in the park during the peak flight, from late April to early May.

The Canada goose is an abundant migrant through Peterborough county, to the northwest, most commonly seen on migration from 01 March to mid-May and again from early September to mid-November (Sadler, 1983, pp.44-45). Not seen between 06 June and 19 August. A few semi-tame, non-migratory birds may overwinter, an artificial development as these `need some care and feeding in winter'. 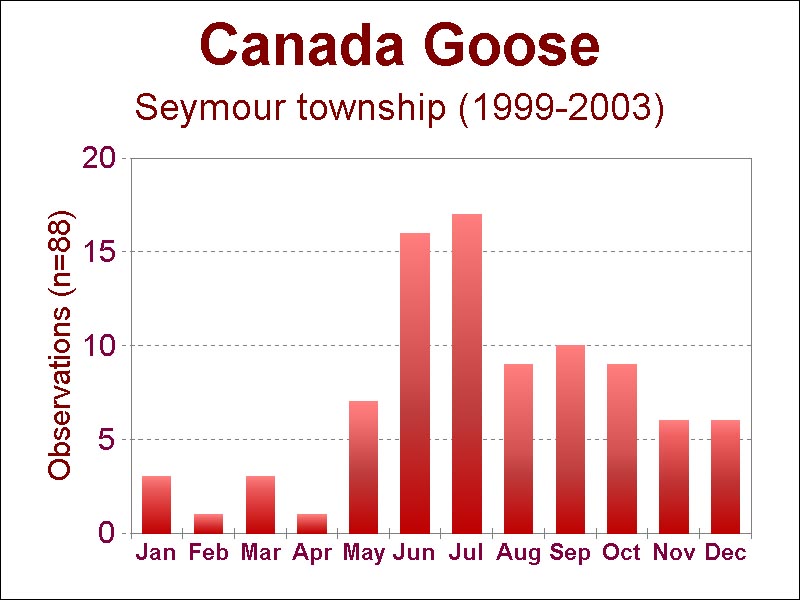