Based initially on 133 observations in Seymour township, Northumberland county, southeast Ontario, 1999-2006, and now on 498 observations, through 17 November 2020.

The kingfisher is found throughout all provinces of Canada, from Vancouver Island to Newfoundland (Godfrey, 1979, pp.234-235). The earliest and latest sightings of this hardy summer resident during the initial, eight-year period were on 09 April (twice) and 20 November, apart from a unique set of sightings in early 2005. A single individual was sighted four times over Trout Creek, just west of Campbellford, during the interval 19-27 February. In each case this was probably the same bird, although that is just speculation. This was a period (and indeed a whole winter) of alternate thaws and freeze-ups. The creek was flowing openly along part of its course at this time, although with significant ice still along the banks and in the creek bed, and early-morning temperatures often below -10°C. A similar remarkable sighting was made on the afternoon of Saturday 09 February 2013, after a heavy (30 cm) snow fall in the previous 48 hours. Two kingfishers were heard and seen together over the largely-frozen Trout Creek between Simpson and Pellissier streets in Campbellford. The winter to date had also seen strong temperature shifts: snow and pronounced thaws.

The seasonal appearance described above has held through the next decade: abundant in April-September, with a tailing off in October and the first half of November. There are rare yet repeated sightings in the December-March period, such that the bird has been seen in every month, around a clear peak in July. The kingfisher is generally seen or heard during its frequently-raucous passages along watercourses with generally-good rates of flow, such as Trout Creek.

It is usually seen singly, or in pairs. They are wary, typically revealing themselves as they fly away from their perch, upon which you have intruded unawares, with that angry-sounding rattling call. At the time of writing, the last sighting was of an individual flying noisily downstream over Trout Creek, on a mild day, 05 November 2020, the first sighting of the species since 22 September.

The typical nesting site of this species is a burrow dug by the bird in sand, clay or gravel banks (Bent, 1940, pp.111-129). The birds have relatively few natural enemies, although rare cases of predation by a red-tailed hawk or persecution by an eastern kingbird have been described (ibid., pp.124-125).

The kingfisher is known through most of Ontario (Cadman et al., 2007, pp.318-319). It is abundant along the southern margin of the Canadian Shield, a major geological boundary just to the north of Trent Hills. Kingfishers are said to travel up to 8 km between nest sites and foraging areas and thus, though many of the observations in our area are at 3 sites along the lower 2 km of Trout Creek, it is possible that all sightings in a given season or year reflect the presence of just one resident pair.

The typical migration times of these birds through Presqu'ile provincial park, roughly 40 km to the south, is early April to late October, with extreme sightings on 25 March and 16 December (LaForest, 1993, p.223). The mild early winter of 2006-2007 led to a spectacular Christmas bird count on December 17th, around Presqu'ile park (within a 15- mile-wide semicircle centred on the harbour at Brighton, as reported by Doug McRae in The Independent, 20 Dec 2006, p.5). 87 species were logged, plus 7 more seen in the 3 days before and 3 days after the count. The many sightings included two belted kingfishers, plus a number of other species that generally disappear from the immediate Campbellford area, but may overwinter close at hand, as at Meyersburg, or Wooler, or creeks and harbour near Brighton: examples include American robins and red-winged blackbirds. North of Lake Ontario, in Peterborough county, kingfishers are a fairly common summer resident, and may appear in winter, when and where there is open water (Sadler, 1983, p.101). Migration peaks in mid-April and mid-September. Cold seems to be no deterrent, provided that there is the open water for fishing. 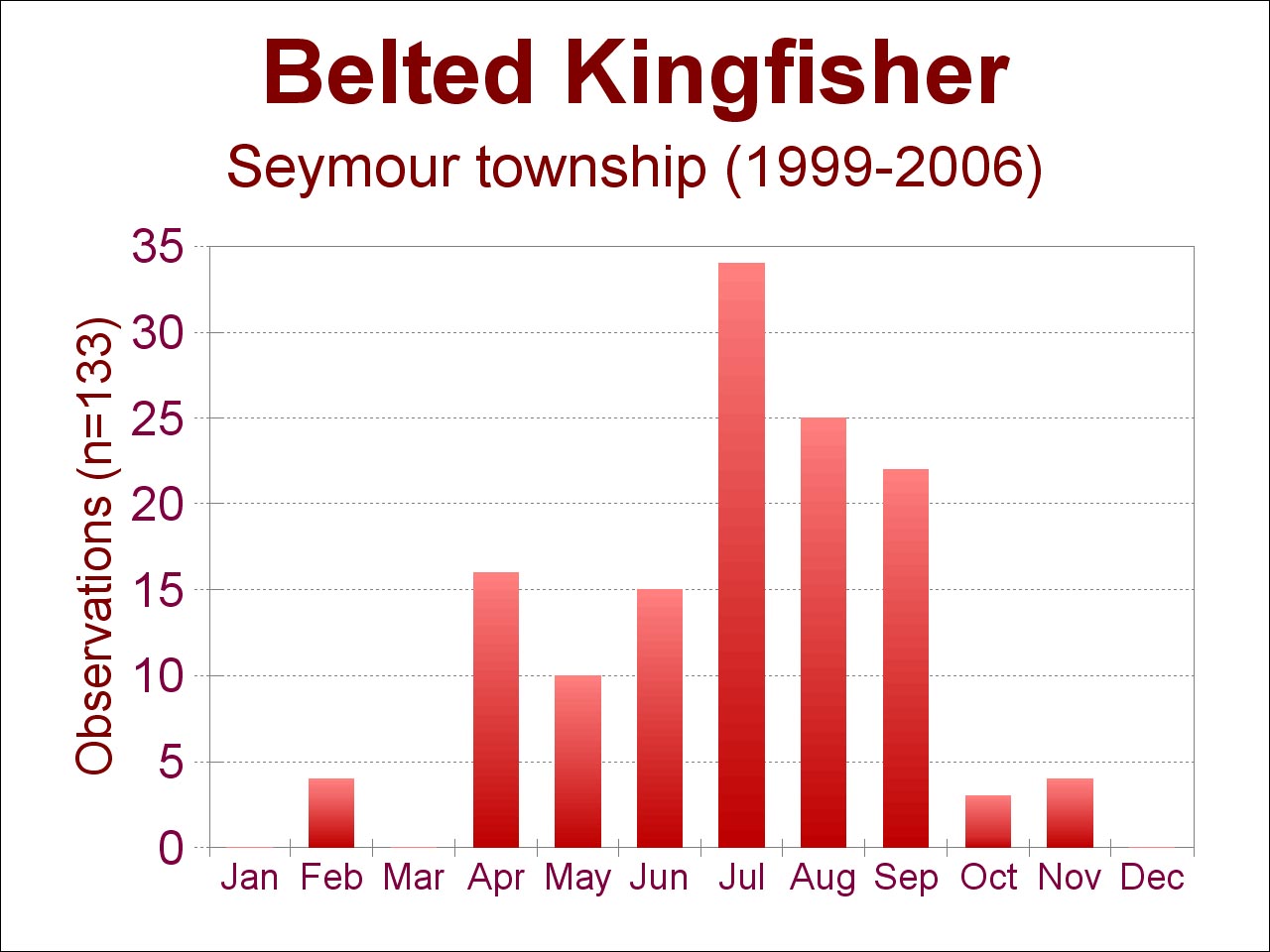