A Neglected Polymorph of Silica?

A new silica polymorph, later named moganite, was described by Florke et al. (1976, 1984). The discovery was made in veins of massive silica cutting flows of fast-cooled welded tuffs (rhyolitic ignimbrites) near the locality of Mogan, on southern Gran Canaria in the Canary Islands.

A lone sample (2372, ex-Excalibur Minerals) is a snowy-white, translucent angular shard of subvitreous silica. It is a small angular chip, barely 4x2x1.5 mm. The exterior surface, visible at one end, appears etched, dull white and spotted with dark impurity.

Moganite was recognized as silica fracture fillings, joint sealings and pressure shadows. It is concentrated in the lower portions of flows, forms nodular masses 1-5 cm wide in pores and cavities, and infills vertical and horizontal cooling cracks with platy masses 1-10 mm thick. Heaney and associates (e.g., Heaney and Post, 1992) soon recognized moganite as a common constituent of much agate, chalcedony, chert and flint, notably in cherts from arid, alkaline settings. Lutecite is a term for length-slow chalcedony, which may really be moganite; it has been identified as an indicator of evaporitic sedimentation. Heaney (1995) examined silica in sediments of Permian to Recent age, with the overall finding that non-evaporitic silica often contains 5-15 wt.% moganite, whereas evaporitic specimens may contain 20-75% moganite. No chert from non-evaporitic sediments has >25 wt.% moganite.

Moganite has been detected in rocks as diverse as abyssal cherts, carbonate turbidites, silica sinters, and veins in ignimbrites and basalts. It seems that moganite is a metastable phase on the Earth's surface, and eventually transforms to quartz. An official publication to confirm moganite as an approved mineral is overdue (the International Mineralogical Association has already certified it as new mineral 99-035). However, the ubiquitous presence of naturally-occurring silica (in granite and sandstone, veins and vugs, beach sand and pebbles, etc) will tend to mute the enthusiasm with which such a new mineral is received. Rockhounds naturally prefer the more attractive forms of crystalline quartz (rock crystal, amethyst, citrine...) and moganite would seem to fall into the category of the cryptocrystalline, vein- and vug-filling forms of silica (chalcedony, onyx ...). Two examples of fine silica from this web site are displayed below: some proportion of this material may yield candidates for "moganite" status! 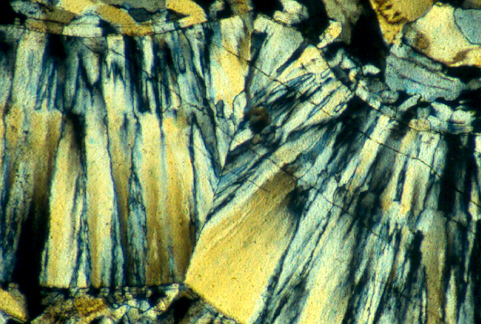 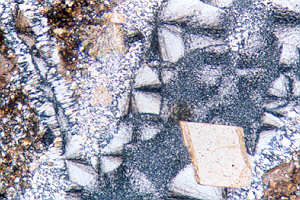 
The silica (originally termed SiO2-G) displays a radiating, platy crystal habit, and was said to exhibit an x-ray diffraction pattern similar to and yet distinct from normal silica. Hand-specimen properties are apparently indistinguishable from chalcedony. In thin section it is colourless, composed of small fibrous domains showing positive optical elongation (that is, they are "length slow"). Individual fibres are mostly thick and commonly bent. The microstructure is composed of lepidospheres (lepispheres) of length-slow fibres. The silica contains as much as 2.7 wt.% H2O, and 0.5 wt.% CO2. High-resolution Raman spectroscopy provides a measure of the moganite content and its spatial variation. Variations in the moganite:quartz ratio are revealed by varying intensity ratios of the main symmetric stretching-bending vibrations (A1 modes) of alpha-quartz (465 cm-1) and moganite (502 cm-1) respectively. The Raman microprobe indicates that the moganite:quartz ratio varies, and is correlated to cathodoluminescence colours and intensities (Gotze et al., 1998).

Those wishing to explore the progress of moganite towards mineral recognition should examine the following references, selected from the MINLIB bibliography and recently updated. These include much data on analytical techniques, and largely inform the present summary.

Heaney,PJ and Post,JE (1992) The widespread distribution of a novel silica polymorph in microcrystalline quartz varieties. Science 255, 441-443.