North from The Soo 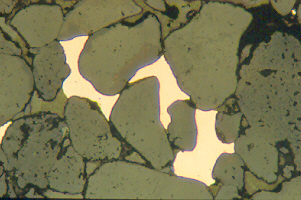 22. The White Pine copper mine, which closed recently, worked a large sediment -hosted Cu sulphide and native Cu deposit, in contrast to the many old mines of the Keweenaw peninsula to the east, which targeted native Cu deposits in basalt flows and interflow sediments. This photomicrograph displays bright native copper forming a cement between rounded grains of quartz and feldspar in the host sediment. Copper also occurs as the sulphide chalcocite. 80X magnification, long-axis field of view 1.4 mm, in reflected, plane-polarized light. 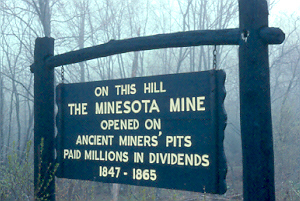 23. The Minesota copper mine is one of many old workings in the Keweenaw district, centred on Houghton. The site lies on the outskirts of the small town of Rockland, near the Ontonagon river. The mine was developed in the 1840s, and was famous for large, metre-scale masses of native copper. Cornish miners were involved in the early days. On 07 March 1857, the largest copper mass ever reported was discovered: its estimated mass was over 500 tonnes and the mass was 14 m long, 5.6 m wide and roughly 2.5 m thick. Because copper is a malleable metal, it had to be removed by cutting instead of blasting. 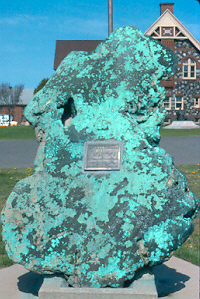 24. Giant masses of native copper such as this exhibit on the Keweenaw peninsula were encountered in underground mining, as described above. Others were found on surface as glacially transported "float" boulders, and some were used by native Americans thousands of years ago to construct a range of weapons, tools and ornaments.

Wayman,ML (1989) Native copper: humanity's introduction to metallurgy? In `All that Glitters: Readings in Historical Metallurgy' (Wayman,ML editor), Metallurgical Society of the CIMM, 197pp., 3-6. 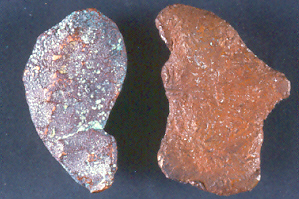 25. Nuggets of Native Copper. A number of elements occur in the "native" or uncombined state, including sulphur, carbon (as graphite and diamond) and metals such as copper, silver, gold and bismuth. Samples of native copper are popular with mineral collectors. These 6-cm examples are from the Houghton district. 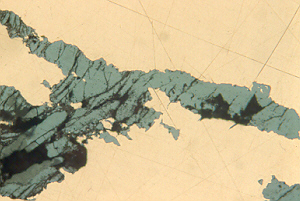 26. Archaeological Artefact made of Native Copper. The provenance of copper artefacts manufactured by the native Americans can be tested by various means, including bulk chemistry and metallography. Copper tools from the Minnesota-Ontario border have been dated back to 7,000 years ago! The copper would have been a valuable trade item, either as a raw material or worked into arrowheads, knife or axe blades or beads. This photomicrograph is a native copper item recovered from the McCollum site in Ontario. Note the visual purity of the metal, cut by a ragged veinlet of cuprite (copper oxide). 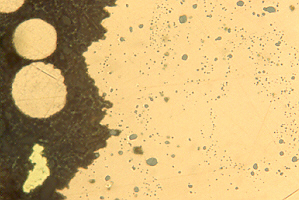 27. Archaeological Artefact made of Smelted Copper. Smelted copper can be distinguished chemically by elevated levels of gold and (usually) silver. Rare copper samples from the Keweenaw district may however have extreme compositions, with physical admixtures of silver and copper metals or with occurrence of unusual copper-arsenic alloys. This sample, from the Ball site in Ontario, displays cuprite as tiny blebs of slag, a diagnostic feature of smelted copper. The copper would have been traded to the native peoples by European traders, and was brought to North America in the form of copper kettles, valuable trade goods. 160X magnification, long-axis field of view 0.7 mm, in reflected, plane-polarized light. 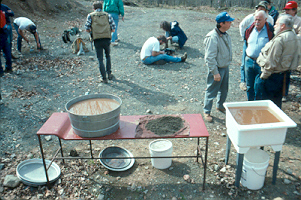 28. The Lake Ellen Kimberlite is an example of a class of unusual rocks which may host commercial diamond deposits. Named for Kimberley in South Africa, these rocks are generally olivine-rich and susceptible to deep weathering at the Earth's surface. The Lake Ellen kimberlite, exposed in a small pit, was a 1971 discovery in eastern Iron County. The body is a diatreme-facies kimberlite roughly 20 acres (8 ha) in area. 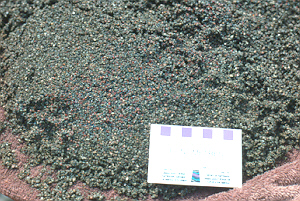 29. Heavy Minerals in Kimberlite are frequently used in exploration for these rocks, and for the diamonds contained in a minority (roughly 10 percent) of kimberlite occurrences. While the olivine and alteration products such as serpentine may disintegrate quite close to the source, more resistant minerals may be transported long distances by water or ice (see Photo 15 for an introduction to provenance studies). These resistant heavy minerals include chromite and ilmenite (black oxides of iron with chromium and titanium), diamond itself, and silicates of the pyroxene and garnet families.

Because diamond is so rare, distinctive compositions of the other, relatively common minerals provide valuable exploration clues. In this pan, a refinement of the classic gold prospector's tool, we can see highlights of abundant red and orange garnets amongst the dull green material of the kimberlite matrix.

McGee,ES (1988) Potential for diamond in kimberlites from Michigan and Montana as indicated by garnet xenocryst compositions. Econ.Geol. 83, 428-432. 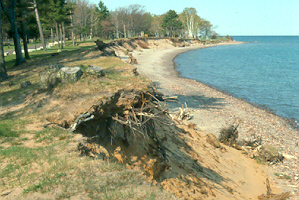 30. Cliffs of the "U.P." (Upper Peninsula) of Michigan east of the Keweenaw peninsula are mostly low, sandy affairs, with the exception of the colourful strata at Pictured Rocks near Munising. This stretch of shoreline displays the erosion of unconsolidated sediments that can be observed at many sites around both upper and lower Great Lakes.