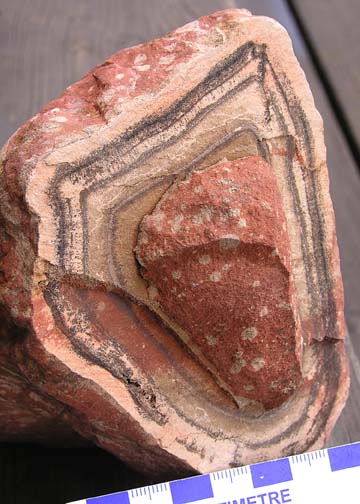 A striking ovoid concretion roughly 13x11x9 cm in size, with a remarkable internal structure. This rock was found northeast of Thunder Bay in northwest Ontario, Canada. It was discovered loose in the bed of a seasonal stream, westwards of the resort community of Loon Lake.

A spectacular concretion of siltstone of the Mesoproterozoic Sibley Group, the outer and inner surfaces showing reduction spots, presumably around organic matter in the fine, orange silt. As found in June 2008, the rock was naturally broken on a flat plane to reveal an interior nodule, surrounded by thin bands of black manganese oxides (possibly a 2-dimensional feature).

Concretions are found in sandstones and, less commonly, in other kinds of sedimentary rocks such as shales and mudstones. They are commonly elongate in the direction of maximum permeability during diagenesis (consolidation and alteration) of a new sediment (Blatt, 1982, pp.54-55,209-211). They are often composed in large measure of carbonate or iron oxide minerals such as calcite, dolomite and hematite. Selles-Martinez (1996) reviews the morphology, nomenclature, classification and origin of concretions, in syngenetic, diagenetic and epigenetic processes.

Early descriptions of Sibley strata were provided by Tanton (1931, pp.47-56) and Moorhouse (1957). Rogala et al. (2005, 2007) review the Sibley sediments, which were deposited in a subsiding intracratonic basin centred south of Lake Nipigon. The Sibley is subdivided into five formations, dominated overall by fluvial and lacustrine facies. The strata are generally well-preserved, flat-lying and mostly unmetamorphosed. They include both siliciclastic and lesser evaporitic sediments. The Sibley sedimentary basin is some 400 km long and 175 km wide.

Moorhouse,WW (1957) The Proterozoic of the Port Arthur and Lake Nipigon regions, Ontario. In `The Proterozoic in Canada' (Gill,JE editor), University of Toronto Press, 191pp., 67-78.