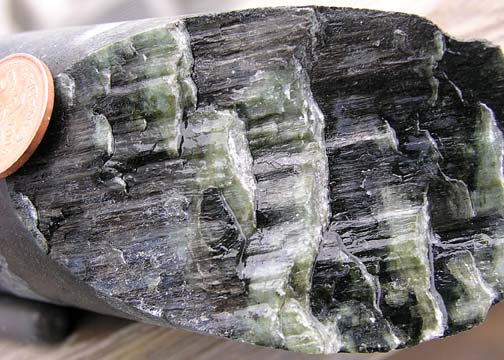 This sample of diamond-drill core (NQ gauge, nominal diameter 47.6 mm: coin is 18.5 mm wide) displays a fracture cutting a peridotite body which intrudes the Archean Quetico subprovince in the Current Lake area, some 40 km due northeast of the city of Thunder Bay in northwest Ontario. The ultramafic intrusion, a 21st-century discovery with nickel- copper- platinum-group-element mineralization, has been the focus of intense exploration by Australian junior firm Magma Metals Limited, which confirmed the existence of the mineralized intrusion by drilling in December 2006, and went on to drill-define a resource of Pt, Pd, Ni, Cu and related metals. Magma was taken over by an Australian neighbour, Panoramic Resources Ltd, in early 2012, who some years later sold the project to local start-up Clean-Air Metals: it is documented on their web site, under the name Thunder Bay North. The intrusion has been shown to be a chonolith (pipe-like feeder) and related magma chambers of Keweenawan age, circa 1107 Ma, a time of emplacement of ultramafic bodies in the northern Great Lake states and northwest Ontario.

In the present context, note the strong alignment of linear grooves, which are scored into a relatively low-temperature alteration assemblage (talc, carbonate, chlorite...) in a fracture cutting the peridotite. These grooves, known as slickensides, are a reflection of small-scale motion along the fracture. In this case the motion is probably on a mm or cm scale, but larger fault planes may display similar features. Because they may indicate the sense of motion on a fault plane, such features are termed kinematic indicators in structural geology. A fine illustration of slickensided peridotite in a younger terrane, in a Jurassic intrusion from Oregon, is also well worth a look.

Slickensides are lineations developed along the surfaces of larger structures such as faults and veins, shear zones and folds, cone sheets and intrusive contacts. The lineations are believed to lie parallel to the direction of relative movement across the host plane. Their origin is perhaps akin to the well-documented development of fibrous cross-structures in veins. Slickensides are a useful kinematic indicator in the interpretation of faults and thrusts (see, e.g., Saha et al., 2010; Purohit et al., 2010). Slickensides are seldom considered in detail, except as clues to larger stories. Thus in the MINLIB database, not one title in 83,500 (January 2013) specifically mentions these distinctive features. However, a survey of 40-plus articles that describe slickensides en passant reveals some common features. Hobbs et al. (1976, pp.268-270,303-305) provide a general description (see also Wise et al., 1984).