from the southeast coast of Cuba 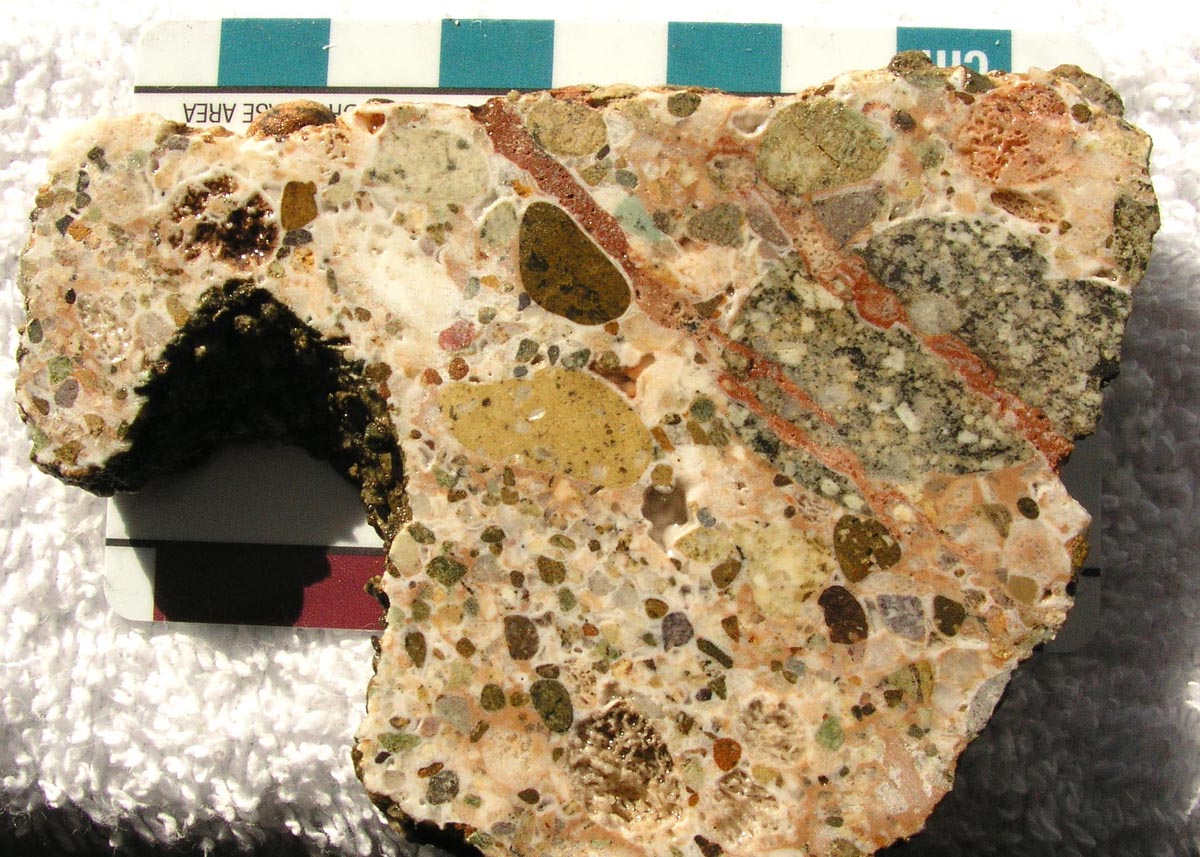 "Rock of the Month # 72, posted for June 2007" --- This sample is from a discrete pebbly layer, perhaps 1 m thick, at and near the top of a roughly 20-m-high sea cliff of coral-rich marine limestone of probable Pliocene age. It is a polygenetic conglomerate (a coarse sediment with abundant rounded pebbles in a finer-grained cement), here interpreted as an ancient beach deposit. The well-rounded mm to cm-scale pebbles are very diverse, with minor sedimentary "intraclasts" and a spectrum of porphyritic to equigranular volcanic rocks ranging from basalt to dacite. Some clasts are strongly epidotized; others are quite fresh. All the clast sources are plausibly located to the north and east. The cliff-top horizon is thought to be a beach developed in a shallow-water interval at the end of a longer period of quiet, deeper-water accumulation of carbonate muds.

The rock is very striking, with colourful (variably epidotized and limonitized), well-rounded cm-scale igneous clasts in a cement of drusy to micritic carbonates. The majority of the clasts in the small sample are volcanic, basaltic to andesitic and dacitic. Others are plutonic: some amphibolitized mafic-ultramafic rock is present, but more abundant are granitoid clasts. These rock types are not unexpected: Palaeocene volcanic rocks form the Sierra Maestre mountain range to the immediate north, and Cenozoic granitoids occur to the east (Goitizolo, 1978). An example of the latter, a quartz diorite at Daiquiri, 20 km east of Santiago de Cuba, is dated at 49±6 Ma (Meyerhoff et al., 1969).

The rock may represent a transient shallowing episode, allowing a beach with well-rounded pebbles to form, after a long interval of quiet, subtidal carbonate sedimentation. However, the fractures are not shrinkage cracks: the oxide-stained fractures cut pebbles of hard volcanic rock, and so they are later, brittle tectonic features.