a lithium mica from New Mexico 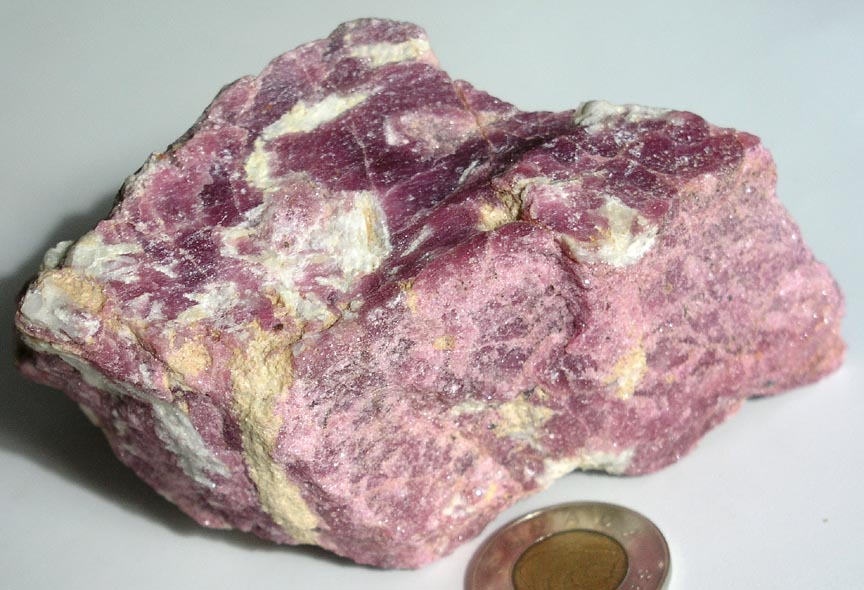 The striking mauve colour of this sample is imparted by lepidolite, a mica rich in lithium, the lightest metal in the periodic table. The colour implies a dramatic concentration of lithium, relative to its average abundance in continental crust, perhaps to 1,000 times a more-typical 20 parts per million by weight. A similar, three-order-of-magnitude enrichment factor is also typically required to permit mining and recovery of still-rarer precious metals such as gold and platinum (assuming in each case that these metals are the principal economic commodity, i.e., that they are not byproducts of recovery of other metals in the ore). The coin is 27 mm in diameter. Mass of sample is 513.68 grams, bulk magnetic susceptibility <0.001x10-3 SI units. This is GCW sample 211, a loose fragment collected on 10 September 1983.

The Harding pegmatite is one of the most famous pegmatites in the United States. It is a complex, zoned granitic pegmatite (Cameron et al., 1949; Cerny and Ercit, 2005) with diverse minerals, including a number of rare-element species. A very partial list would include quartz and feldspars, Li-bearing micas (lepidolite and rose muscovite), calcite, beryl, holmquistite (a Li- rich amphibole), complex oxides such as columbite-tantalite and microlite, spodumene (an Li-rich silicate found in huge prisms) and apatite.

Some of the Li-rich rock was shipped for use in the ceramics industry after World War I. The pegmatite is chemically as well as lithologically complex, with concentrations of Li and Be, Nb and Ta, U and other less-common metals. Mineralogist, collector and mineral dealer Arthur Montgomery (1909-1999) donated the mine to the Earth and Planetary Sciences Department of the University of New Mexico in 1978 (Gugliotta, 2000; Wilson, 2000). Some of the constituent metals, including Nb and Ta, are sought-after commodities today (see, e.g., Lumpkin et al., 1986; Moller and Morteani, 1987).

Lepidolite occurs in a range of evolved granitic rocks, often with other less-common-metal minerals, and sometimes with very rare or striking varieties. One example, blue Paraiba tourmaline, is known from just four deposits in the Borborema pegmatite province of Brazil. The host rocks of the bright blue tourmaline are rich in Li minerals, such as spodumene or lepidolite mica (Beurlen et al., 2011).