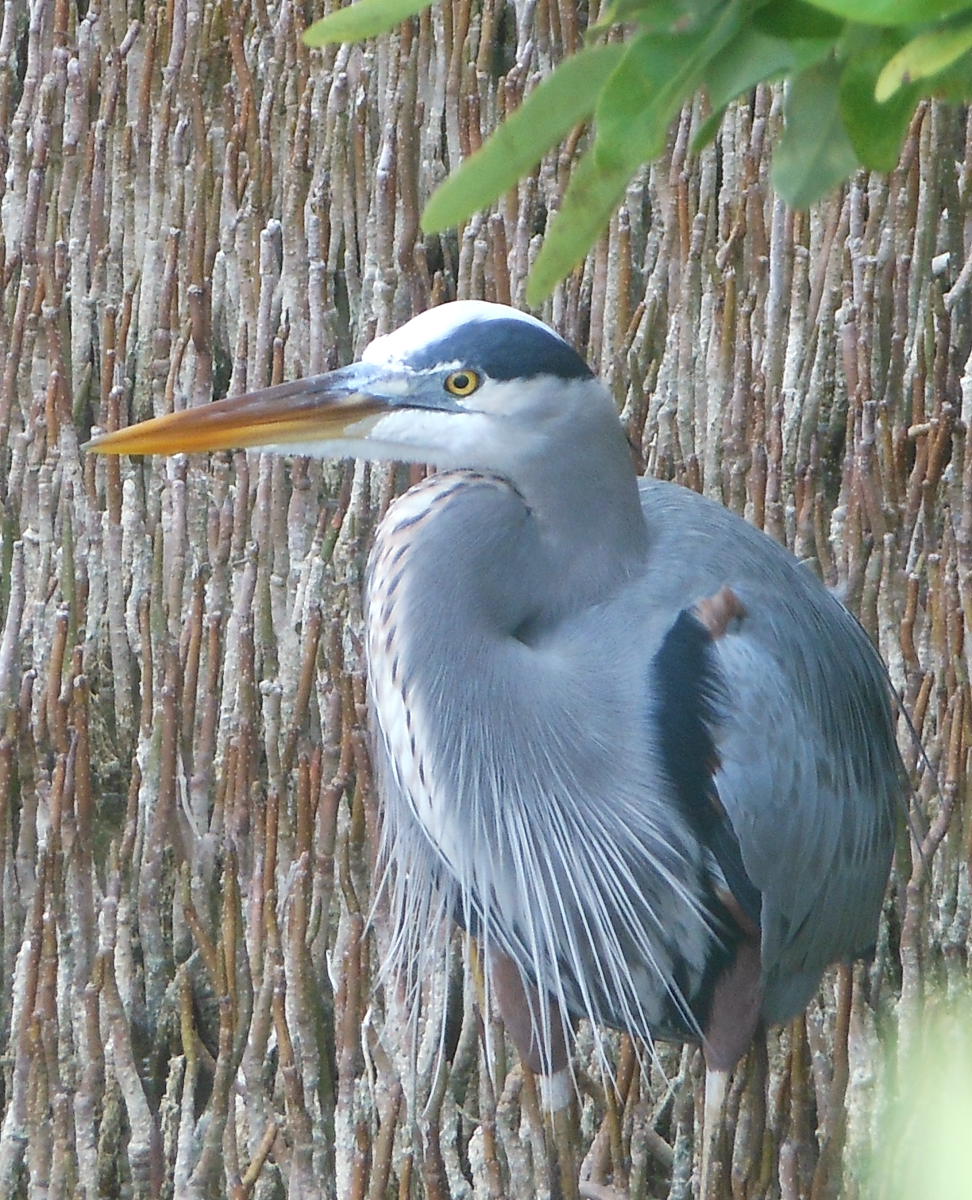 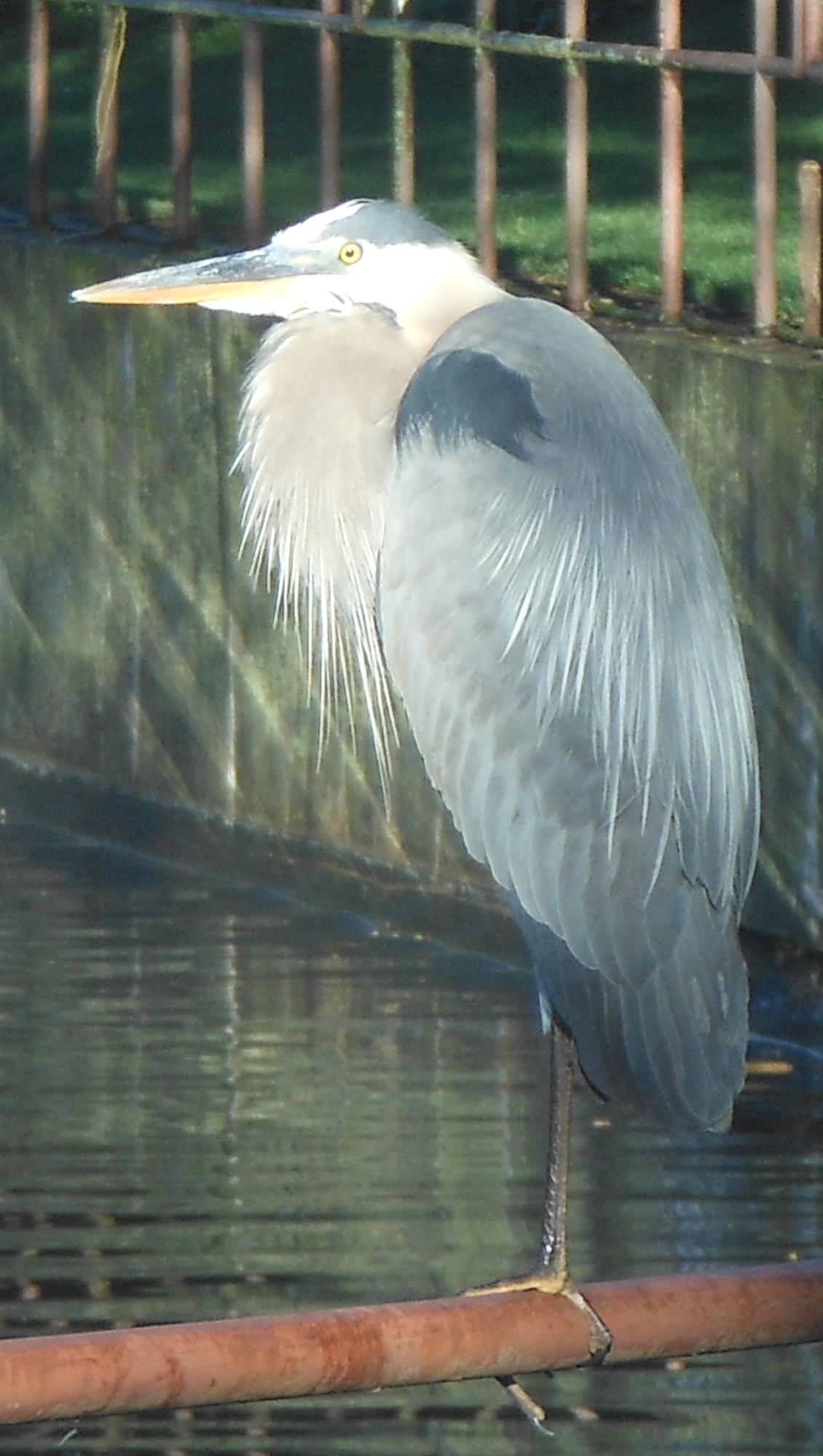 The great blue heron, seen in two photographs representative of the bird's home in the northern hemisphere winter and summer. Left: A mangrove swamp at Playa Costa Verde, Holguin province, northeastern Cuba, 20 January 2014. Right: Sunset view of another individual on Trout Creek, 200 metres west of the confluence with the river Trent in Campbellford, 08 July 2014.

The earliest and latest sightings of this unmistakable bird during this 22-year period were 25 March and 11 November. 90 percent of sightings are over the six months from May through October. This large heron is often seen in a powerful launch, great wings flapping, when he or she is disturbed during hunting along a shallow creek. At other times it may be seen motionless, reed-like, waiting for a meal at the vegetated margin of a body of water. This heron is occasionally seen flying overhead with powerful, unhurried wing beats, but is most reliably found along the watercourses. These include the Trent river itself, including the gorge on the west flank of Ferris Park and the Percy Reach downstream, and along the walk between locks 8 and 9 of the waterway. One to three herons would be a normal sighting day, but a rookery with a dozen of these birds was noted near lock 8 in May 2000. The Crowe Bridge Conservation Area is frequented by this species, as are some of the smaller tributaries, such as Trout Creek.

This bird is a common migrant and summer resident from late March to late November at Presqu'ile provincial park, roughly 40 km to the south, with extreme sightings on 11 March (1989) and 02 January (1977). They have wintered successfully in the Brighton area, but potential feeding sites generally freeze in the area of the Presqu'ile peninsula (LaForest, 1993, pp.43-44). In Peterborough county, to the northwest, the great blue heron has mostly been noted from 04 March to 02 October (Sadler, 1983, pp.38,168). Most are gone by early October, but a few have tried to overwinter, and been seen in late November, with one remarkable sighting on the Otonabee River on 14 January 1977.

The great blue heron is virtually ubiquitous in its occurrence across southern Ontario, especially along the southern margin of the Canadian shield, with its abundant lakes and sporadic woodlands (Cadman et al., 1987, pp.50-51). A pair may build a single nest, but more than 99% of great blue heron nests in Ontario are in treetop colonies, which average about 35 nests and typically have a lifespan of about 10 years, and sometimes longer (Cadman et al., 2007, pp.158-159). 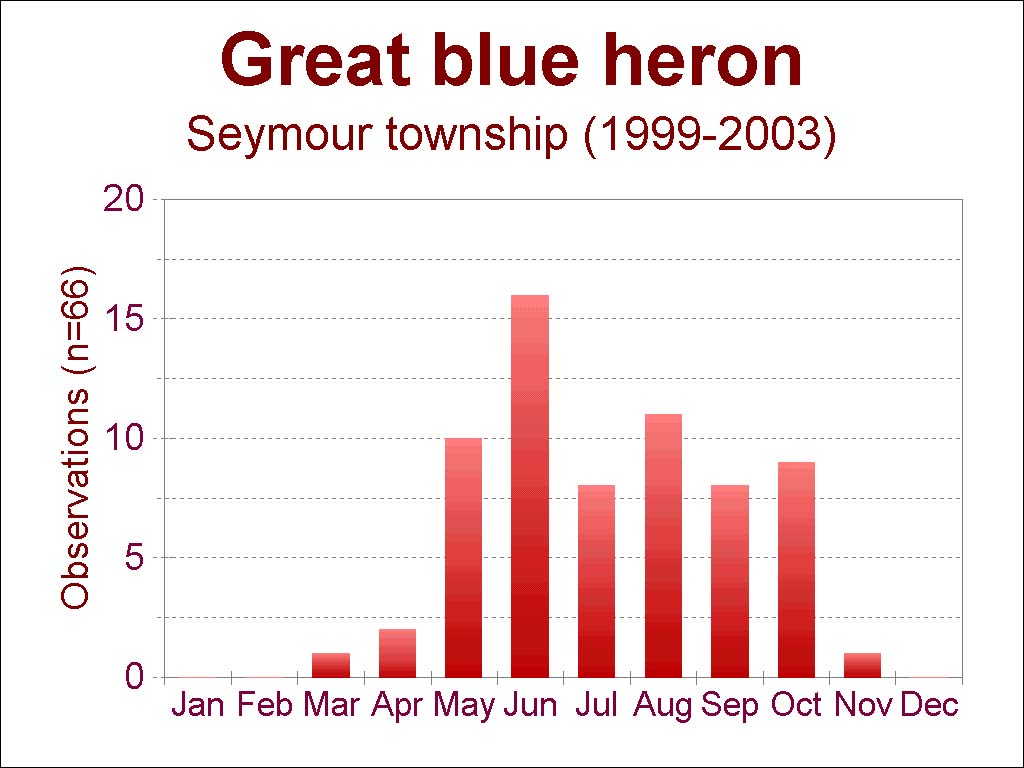