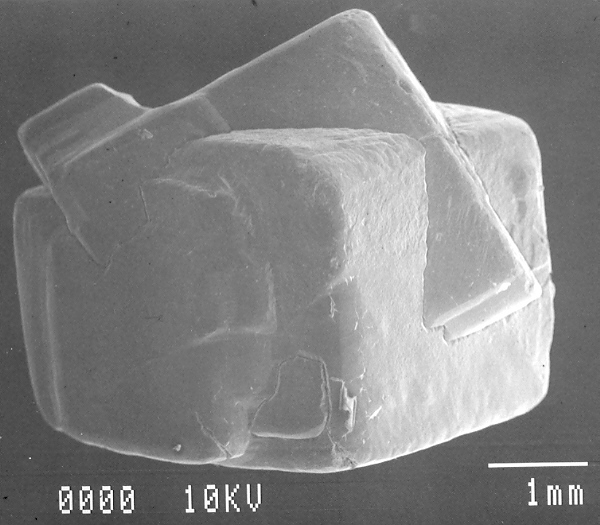 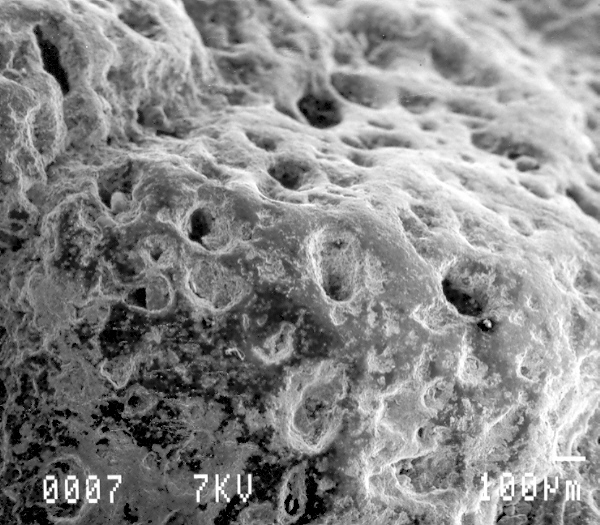 Right: 2. The unusual, non-gemmy form of diamond known as carbonado from central Africa. Note the sintered appearance (bubbly voids in a glassy or microcrystalline matrix) and rough surface. This is part of an irregular, 10x9x5 mm, 4.22-carat mass. The sample is grey, shiny and almost graphitic in appearance on the featured side, dull grey on the reverse. The spongey or porous appearance is very distinctive. Small white sand grains appear lodged in some of the cavities in the surface. SEM view - a secondary electron image at 45X magnification, scale bar 0.1 mm, working distance 29 mm.

"Rock of the Month # 26, posted for August 2003" Samples 1893 (diamond from the Aikhal mine, Yakutia, Siberia, Russia) and 2373 (carbonado from the Bangui region of the Central African Republic). Rough diamond specimens supplied by David New of Anacortes, WA. Photography on JEOL-840 scanning electron microscope at the Department of Geology, University of Toronto, with technical assistance from George Kretschmann.

The Siberian specimen represents the classic crystalline diamond, in the form of interpenetrant cubic twins. Carbon occurs as a native element in several polymorphs, of which the most familiar are graphite (very soft, hexagonal, black, as anisotropic sheets) and diamond (extremely hard, but not indestructible!, cubic, various colours, generally translucent). In addition there are the polycrystalline fine-grained aggregates discussed here (carbonado and related forms), and other rare polymorphs. There are lonsdaleite (hexagonal, found in the Canyon Diablo and Goalpara meteorites) and chaoite (hexagonal). Impure, non-porous polycrystalline grey diamond is often referred to as bort (in the past, also obscurely termed framesite or stewartite). 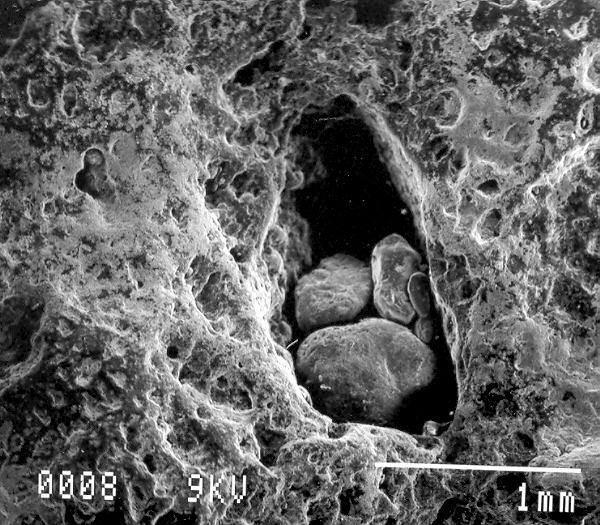 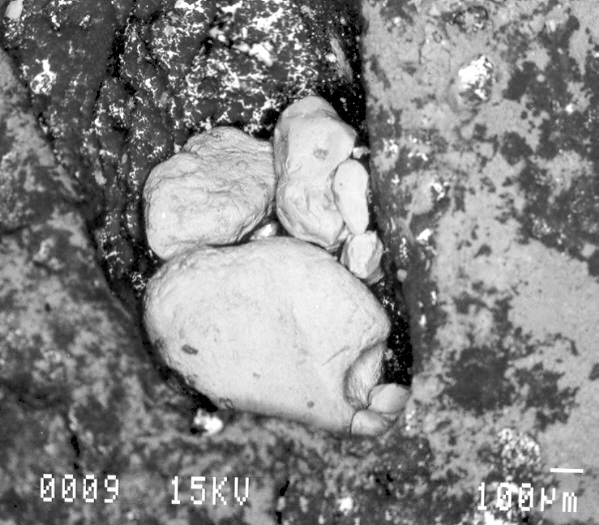 Energy-dispersive spectroscopy (EDS) of the secondary x-rays indicates that the rounded grains filling the cavity are indeed quartz: silica with at most traces of other components. The carbonado surface is quite complex: the dark areas in the BSE image are much as one might expect, since carbon does not yield electrons of sufficient energy to be detected by this equipment. However, much of the surface appears paler, and the EDS spectra confirm that heavier elements are present: especially Al and S plus traces of Si, K and Ca, Ti and Fe. The very limited data are consistent with a partial coating by a thin film of a sulphate (in principle alunogen, hydrated aluminium sulphate, rather than the more-common alunite and jarosite) and possibly other minerals, coating the carbonado.

Carbonado has been described from Brazil and the Central African Republic. The source formations are thought to be Proterozoic conglomerates. In Siberia similar material is known as "yakutite". Diamond referred to as carbonado has also been reported in a few iron meteorites such as Canyon Diablo and Chuckwalla. It does not seem to occur with normal diamonds in kimberlite pipes, suggesting a very different mode of origin. Two principal suggestions are:

More on carbonado and its possible origins.

Carbonado is a porous aggregate of micron-sized diamond crystals. It has not found in kimberlites, although a kimberlitic origin has been suggested in at least one study: other geneses are commonly invoked. The carbonado was first recognized as a form of polycrystalline diamond as long ago as the 1840s, when it was discovered and placer mined in Brazil, S.America. It has since been found elsewhere, e.g., Venezuela, eastern Australia, and the Ubangui region of the Central African Republic, where it is known as `carbons' (Shelkov et al., 1994). A material called yakutite, perhaps related, is found in Russia. It may contain inclusions, such as calcite grains, Fe oxides, phlogopite, silica, chlorite and graphite, but not the SiC found in some CVD (chemically vapour deposited) stones (Chan and Chan, 1995).

Yakutite was first noted in Yakutia, Siberia in 1966. According to Shibata et al. (1993) it shares similar REE patterns to carbonado, distinct from those of kimberlites and monocrystalline diamond, yet similar to crustal rocks such as shale, consistent with a crustal origin.

In contrast, carbonado from diamond deposits in Yakutia contains micron-scale inclusions of native iron and other phases, such as rutile, sphalerite, pentlandite and zircon, as well as florencite, anatase, goethite and kaolinite. This carbonado has LREE-enriched REE patterns consistent with kimberlites (Titkov et al., 2001).

An occurrence in Mato Grosso state, Brazil is quite unique: high grades of Au and Ag with carbonado, and REE enrichment in associated phosphates. The Poxoreo district yields diamonds with tourmaline, rutile, ilmenite, sphene and corundum. The polycrystalline carbonado consists of 1-5 µm monocrystals and sub-micron particles, with native Au, native Ag and alloys. Local diamonds have a plausible kimberlite source, but the carbonado is distinct: the metals suggest a strongly reducing setting for its formation (Gorshkov et al., 2000).

Some have suggested that a large impact event may have been the source of African and Brazilian carbonado (Shelkov et al., 1994, 1995; Master, 1998), while others are sceptical (Grieve and Masaitis, 1996; De et al., 1998). C and N isotopes of carbonado from the two regions are generally indistinguishable.

Assorted names have been applied to forms of reduced carbonaceous matter, some of which is rich in trace metals. These include thucholite (an acronym for Th, U, C and H); anthraxolite; carburanium; yakutite.

Alternative theories for carbonado crystallization invoke the effect of ionizing radiation in relatively radioactive (U, Th-rich) regions of the Earth's crust. Radiogenic Pb may be implanted into the growing diamond by the recoil energy of radioactive decays of Th and U (Ozima and Tatsumoto, 1997). Carbonado may have formed in a U -rich crustal setting: large amounts of unsupported fission Xe and Kr suggest a long-term association of the carbonado microcrystals with U atoms (Ozima et al., 1991).

Carburanium is carbonaceous matter with percent levels of U oxide, found as brittle inclusions in pegmatite veins from northern Karelia, Russia. Acid-leach residues of this material have yielded nanodiamonds 40 nm in size, perhaps formed by irradiation of the C-rich host phase (Sankaran, 1996). However, the tiny size of these "radiogenic" diamonds is orders of magnitude smaller than carbonado samples.

A TEM study by De et al. (1998) secured EDS spectra which are compatible with the identification of rare inclusion phases in the carbonado diamond matrix, such as SiC and Fe Cr alloys as well as native iron, native titanium and native silicon. The close links between carbonado from Brazil and the Central African Republic does not preclude impact origin for the diamond, although that remains contentious: carbonado lacks the lonsdaleite form of diamond found in impact structures, and verified impact diamonds are far smaller. They suggest that `the role of water in the growth of carbonado merits further exploration'. Carbonados are some of the largest diamonds, but are black and very porous, unlike the non-porous, microcrystalline diamond aggregates found in kimberlites (stewartite, framesite). Although of no value as a gemstone, carbonado is used as an industrial abrasive (it is less vulnerable to catastrophic cleavage than single crystals). Inclusions previously reported in carbonado are of likely crustal origin: orthoclase, florencite, gehlenite and kaolinite - the δ13C values of -25 to -30o/oo in carbonado are lighter than the -1 to -10o/oo in kimberlitic diamond.

Footnote --- The peculiar and varied mineral assemblages found as inclusions in carbonado and related materials require any interpretations of bulk analyses to be made with care, distinguishing the elements dissolved or dispersed in some form in the diamond matrix from those elements which occur largely in discrete inclusions of other phases. This is nothing new in geology: similar problems accompany the distributions of silver in galena, gold in pyrite, and minor elements in coloured gemstones. Published descriptions of carbonado note inclusion phases exemplified by; a) common crustal minerals such as calcite, Fe and Ti oxides such as rutile, orthoclase, sphalerite and pentlandite, mica, chlorite and graphite, b) minerals of restricted occurrence such as gehlenite and florencite, and c) minerals very rare on Earth, at least at crustal levels, such as native iron and native silicon.

MASTER,S (1998) The Kogo structure (Equatorial Guinea) as a possible source crater for the origin of carbonado diamonds from Brazil and the Central African Republic. Meteoritics & Planetary Science 33, supplement, A98-99.

For more on diamonds, see Diamond Crystals from Africa