Based on 3 observations in Seymour township, Northumberland county, southeast Ontario, 1998-2014.

The cuckoo family has two representatives which breed in Ontario, the black-billed and less-abundant yellow-billed species. The latter may be just as abundant on a continent-wide basis, but occupies a more southerly range, overlapping with that of its cousin. Below is a juvenile black-billed cuckoo, the only species seen in the Township in our explorations. This obliging individual ate a large caterpillar and then rested on a low branch, enabling these photographs to record an unusual sighting in the esker just west of Campbellford, on 18 August 2014. Cuckoos are "low-key" birds here, probably in part because their summer visits are largely taken up with ensuring the next generation of cuckoos (?). The two seasonal visiting species are also less flamboyant than the cuckoos seen elsewhere (e.g., Cuba) and their calls are less obvious than the signature "cuck-oo" of the European species, that many think is synonymous with the arrival of spring in rural England. The British cuckoo is one of the various birds mentioned in Shakespeare (Goodfellow and Hayman, 1983). 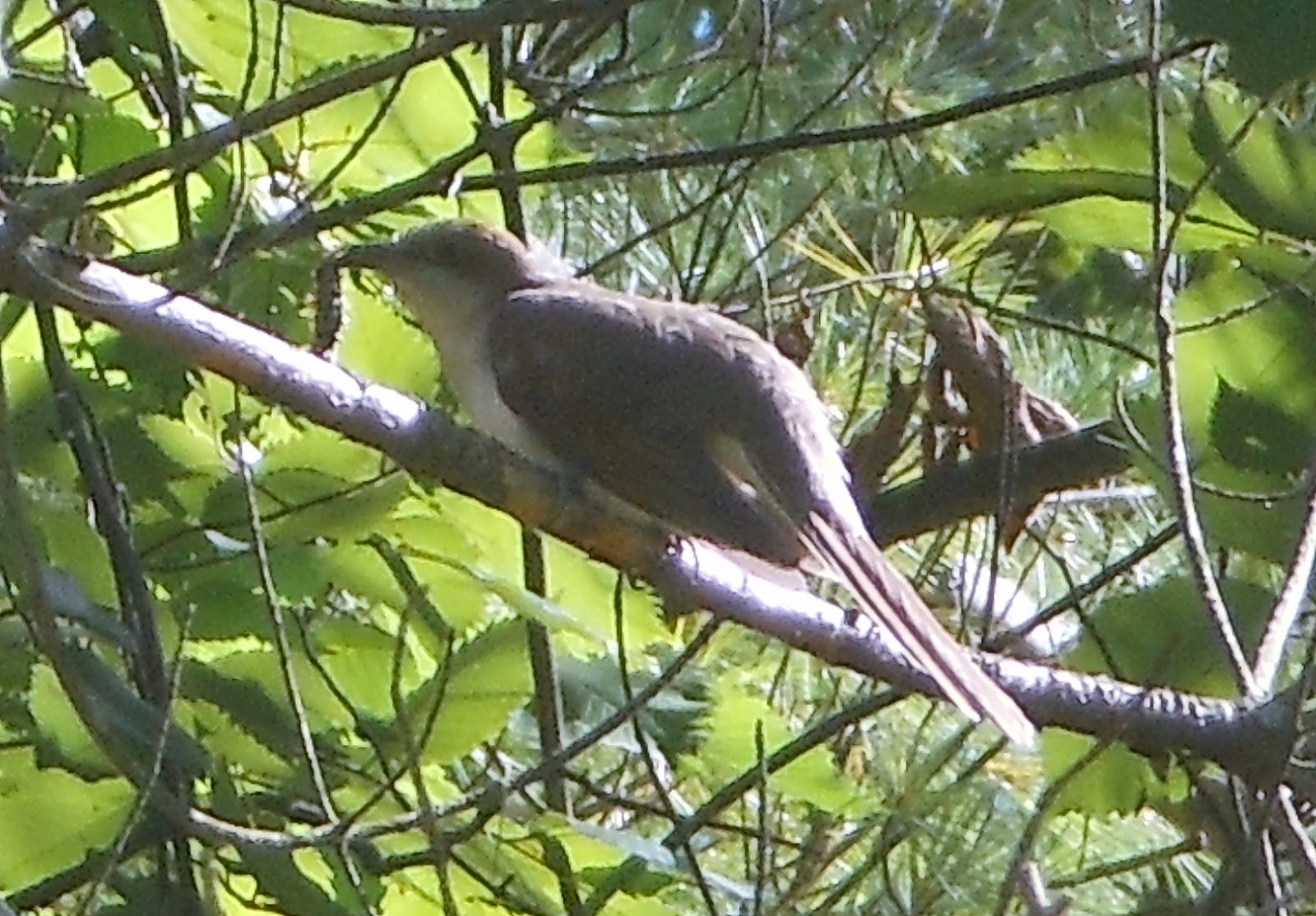 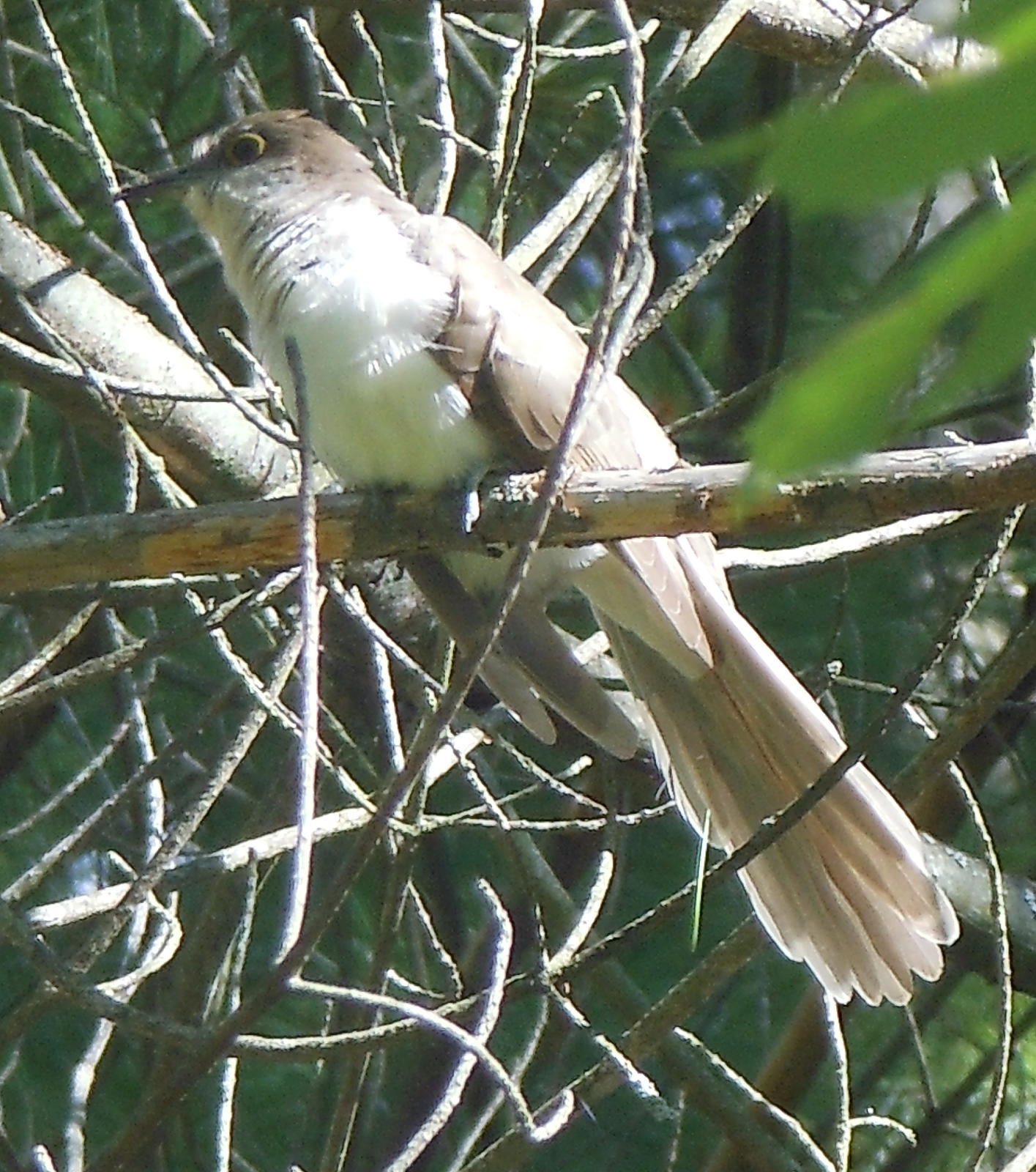 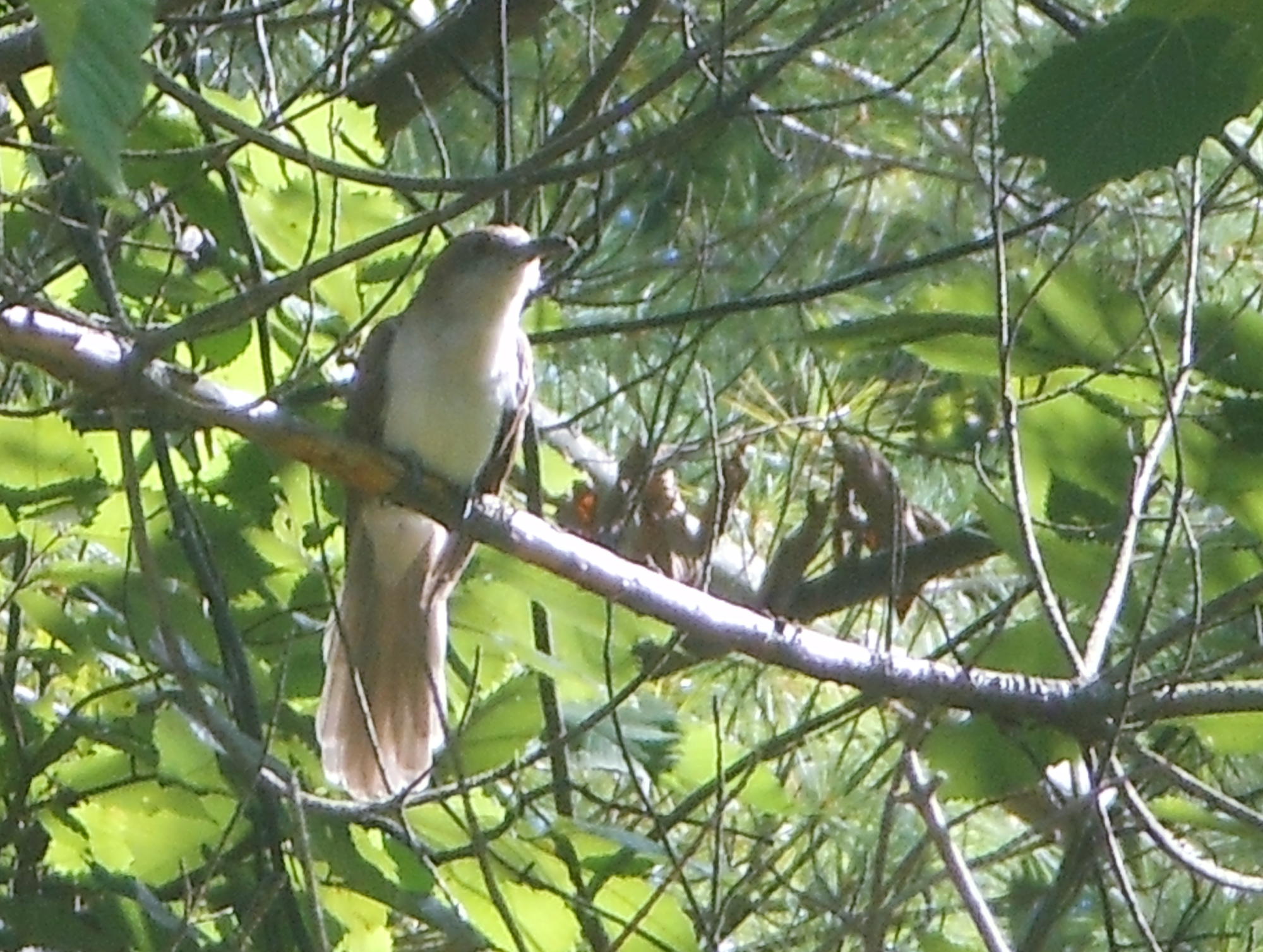 The period of observations included just one other sighting elsewhere, at the Don Valley brickyard site in Toronto. The three local observations were in heavily wooded areas near the Trent river and in the esker near Trout Creek. The earliest was on 13 June and the latest on 18 August.

Cuckoo numbers fluctuate depending on cyclic populations of prey species such as tent caterpillars. At Presqu'ile park, the black-billed cuckoo is an uncommon migrant and summer resident. The bird has been seen in the park as early as 16 May - an observation by Fred Helleiner - and as late as 22 September, noted by Doug McRae (LaForest, 1993, pp.205-206). In the Kawarthas, the bird has been noted between 23 April and 01 October (Sadler, 1983, pp.92-93). Across Ontario, the black-billed cuckoo is found mainly in the southern half of the province, and is often overlooked due to a retiring nature, hiding in thickets (Cadman et al., 1987, pp.198-201). Highest abundances for the species are in the North Bay- Sudbury- Manitoulin Island region, and eastwards in pockets from Georgian Bay to Ottawa along the southern margin of the Canadian shield (Cadman et al., 2007, pp.284-287).

The black-billed cuckoo is capable of building a perfectly good nest and raising its young, though its occasional tendency to act as a brood parasite is well-known. Its victims are often smaller birds such as chipping sparrows and yellow warblers (e.g., Bent, 1940, pp.70-84). Over 80 species (1%) of birds are interspecific brood parasites, thus our cuckoo is less of an anomaly than one might suppose (Gadagkar and Kolatkar, 1996). The north American black-billed and yellow-billed cuckoos commonly nest for themselves, and so the smaller cowbird is certainly a bigger threat to small nesting birds in our area.

Gooders,J (1975) Birds: an Illustrated Survey of the Bird Families of the World. Hamlyn, London, 353pp.